The fever is back. After a few days and a few thousand KO’s, I am ready to write about Dynasty Warriors 7. This famous (and infamous) series is the flagship of Koei and while it is wildly popular in Japan, their Western fans are few and far between. Whether it is the confusing way the story is told, or the game play style, the Dynasty Warriors series cannot seem to get the attention of the majority of the Western gaming market. While fans of the series will purchase this game regardless of what this, or any review has to say, I encourage newcomers to give it a try because Koei and Omega Force have made some great improvements to the Warriors formula this time around.

The last thing you see before you die

If for some reason you don’t know what the Warriors series is all about by now, Dynasty Warriors 7 is a hack and slash game through and through. You just pick from a wide variety of weapons, hit a few buttons and before you know it you are decimating armies. You can also level up your characters by spending points earned in battle on a small skill tree, unlock special upgrades by using different weapons and use heavy siege equipment in battle. Sure it’s not very complicated, but there is just something fun about producing hundreds upon hundreds of KO’s per level.

If you like exploring ancient history, the story presented in the various Dynasty Warriors games is for you. Three kingdoms, and a fourth created later on, are at war with each other to try and unify China. Unfortunately, most of the previous games have had a difficult time explaining the timeline. This is either due to a flat story that every character can play all the way through, or a convoluted series of stories told from each character’s perspective.

Part of the story mode looks like a History Channel show... and I'm ok with that

Thankfully, Dynasty Warriors 7 does a great job of fixing this. Instead of using the two methods mentioned above, Dynasty Warriors 7 has four separate stories following the Shu, Wei, Wu and Jin Dynasties. Each of these stories follows its dynasty from beginning to end jumping from character to character along the way. Using different characters’ points of view makes the story very engaging and easy to understand. While some minor story elements are changed, this is the first game in the series that explains itself well enough for players to follow without any background knowledge on the source material.

In addition to the four stories, you can also play Conquest Mode. In this mode China is very roughly represented by a hexagon map where each hexagon represents a battle, or a city. Some battles are specific to one character, but most of them can be played with anybody. You can even switch characters in between battles if you want to play as multiple people. This is also where the online aspect comes into play. You can either join someone, or send a request for someone to play on a specific stage. I connected with people a few times and it works reasonably well, but unless you are playing and talking with a friend it is like you are playing with a super smart AI ally. The hex map in conquest mode is pretty expansive and there is a lot to do, so you will be busy here for a while.

Dynasty Warriors 7 has its graphical ups and downs. All of the main characters are super detailed and look great, but when they are around the mass produced soldiers, you can really see the stark contrast in detail. As far as generic peons go, a lot of them look the same, but the officers have a few different models and that is a nice little upgrade. Also, when you defeat an enemy officer or reach a milestone in KO’s the soldiers around you will raise their swords and cheer which gives the battlefield life, and the various levels need it. Most of them are dirt paths with a campsite and a castle every now and then, but there is never much going on. There is also some slowdown and enemies will just appear in front of you from time to time, and with the capabilities of these current gen consoles it seems like that should not happen anymore. Lastly, while the in-game cut scenes look pretty good, the full motion videos look great and they are a joy to watch.

I was looking forward to hearing the heavy guitar rock music and laughably bad voice acting that I love to hate. While the rock music is still present with some pretty catchy tunes, I was equally disappointed and impressed with the increased quality in the voice acting. While some parts sound overacted and there are a few awkward pauses here and there, the voice work overall is vastly improved and I can no longer poke fun at it. Koei and Omega Force must have dove deeper into their research because there are a large number of pronunciation corrections. They have fixed a few in past games, but it sounds like they really drove it home this time around. 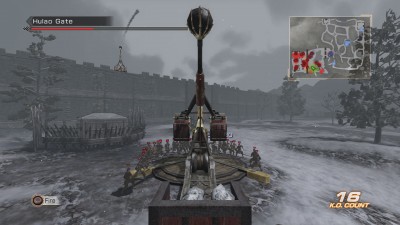 If you are looking for brand new and innovative game play you are looking in the wrong place. Dynasty Warriors 7 brings back the old combo system of light attacks and heavy attacks with the unique special attack for every character. Instead of giving every character their own fighting style, the move sets are now based on what weapon you are using. To keep the incentive of using different characters, a new attack called an EX attack is introduced and it is activated differently for each character as long as they are using their primary weapon. While this might sound like a step backward, there are a lot of different weapons to try and this system means that you won’t limit your character choices based on what weapon they use.

If you’re not a fan of the weapon you are using during a battle, go ahead and change it! Odds are you will get tired of the same old sword and spear and you will want sometime different. You can have two weapons equipped at the same time and you can switch between them with the press of a button. You can even switch to two completely different weapons in the middle of a battle, which is a nice touch. Also, as you use the weapons you will slowly unlock that weapon’s “seal” which you can then equip to any weapon. These seals give you buffs that include, but are not limited to increases in health, attack and defense, a faster walking speed and the ability to defeat officers faster. The only problem is each character has their own strengths and weaknesses when it comes to weapon use, so you are sometimes limited in your choices.

Someone give me the number for Zhao Yun's dentist.

During the small amount of time you are not fighting you will be managing your characters and weapons. You can level up your characters by spending skill points earned in battle on upgrades such as an increase to your combo attack, or a larger life gauge. You can also purchase new weapons and animals such as horses to ride, or tigers and pandas to fight beside you when you are in the various cities in conquest mode. There is also a fun little quiz that a scholar will give you every now and then and some of those questions will really test your knowledge of the time period.

While Dynasty Warriors 6 took a step back, Dynasty Warriors 7 takes two steps forward. Fans of the series will feel like they got their money’s worth with the amount of content in the game, and it is also a good starting point for you newcomers who have never played a Warriors title. While it will not sway the haters, the engaging story, upgraded graphics and sound, and classic Warriors game play makes Dynasty Warriors 7 a more than worthy entry to the series.