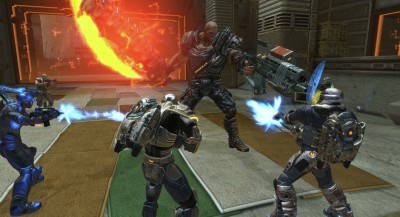 Originally the title only needed players to buy a single copy to enjoy playing without the hassle of a subscription. Now with the “Free Agent” update all players will need to do is to download the title, making themselves a “free agent”, allowing them to still explore the world and level up and play as long as they wish. However, they won’t be able to have access to the auction house or the in-game mailbox, and they will have lower login priorities and won’t be able to join or make agencies, which act as clans or guilds in the title.

Gamers who pay $20 will become an “Elite Agent”, giving them access to all of the features above as well as with double experience points and extra rewards for finishing missions, fans of Global Agenda who have already purchased the title won’t need to worry as they will be instantly upgraded to the Elite Agent status.

Global Agenda was also developed by Hi-Rez Studios, the developers of the recently announced Tribes: Ascend and Tribes Universe.

Glad to hear the free to play announcement or would you much rather it not being free to play? Post a comment below and let us know what you think.