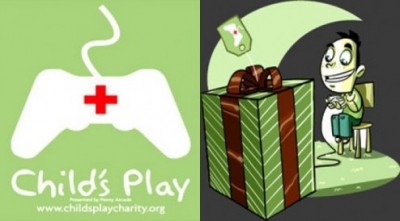 You don’t have to wait until Elder Geek’s Full Hearts Marathon of The Elder Scrolls V: Skyrim to get some video games into the hands of sick kids. Child’s Play has officially opened up its coffers for donations, hoping to raise at least $2 million for the year. At the time of publishing, the team at Penny Arcade have raised $450,000 towards that goal. Information on donating, and passes to its annual Dinner Auction, can be found on the official website.

“We are very excited to begin another year of Child’s Play and once again show the world that the video game community is altruistic as well as compassionate,” said Kristin Lindsay, Child’s Play.  “Since Child’s Play inception we have constantly been surprised by the generosity in both time and money of the community.”