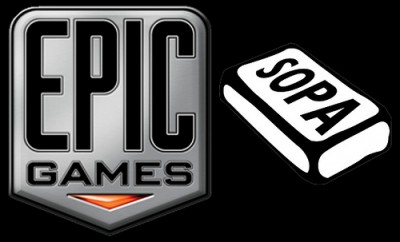 Image courtesy of Inside Gaming Daily

The Stop Online Piracy Act currently making its way through the various chambers of the US government has divided not only the gaming populace at large, but the gaming development community. Epic Games recently announced its refusal to support the bill on the company’s official forums. The studio’s senior PR Manager Dana Crowley posted a statement which read in part, “Epic Games supports efforts that would stop overseas websites profiting from pirating our games, but we have to do that in a way that’s compatible with freedom of speech and due process of law. Thus, we do not support the current version of SOPA.”

Supporters for similar kinds of anti-piracy legislation; like Electronic Arts, Nintendo, and Sony; have publicly distanced themselves from SOPA. The presence of Sony Music Entertainment and other Sony subsidiaries on the government’s list of supporters for the bill, however, has elicited a video threat from the hacker organization Anonymous. The Entertainment Software Association, of which Epic Games is a member, continues to support and work with Congress on the legislation. An official statement from the organization reads as follows (via Joystiq):

“As an industry of innovators and creators, we understand the importance of both technological innovation and content protection, and do not believe the two are mutually exclusive. Rogue websites – those singularly devoted to profiting from their blatant illegal piracy – restrict demand for legitimate video game products and services, thereby costing jobs. Our industry needs effective remedies to address this specific problem, and we support the House and Senate proposals to achieve this objective. We are mindful of concerns raised about a negative impact on innovation. We look forward to working with the House and Senate, and all interested parties, to find the right balance and define useful remedies to combat willful wrongdoers that do not impede lawful product and business model innovation.”

What’s the Elder Geek opinion on legislation like the Stop Online Piracy Act? Should video game companies and organizations support these bills? Comment below!