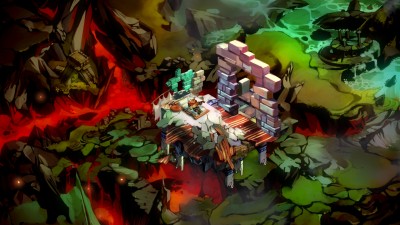 Unsurprisingly, it turns out that internet connections in war-torn Afghanistan kind of suck. It was his “disgustingly” slow connection that lead a stationed US Air Force officer (Reddit username: “bolivar-shagnasty”) to email Supergiant Games, the makers of Bastion. His attempts to download the critically acclaimed action-RPG timed out on both Direct2Drive and Steam, so the officer asked the company whether or not they had plans to re-release the PC/XBLA game at retail. The six-member team – who had no plans for a retail launch – instead emailed the officer, saying they would personally burn a copy of the install application for the game on DVD-Rs and shipped it to the officer’s post.

“We get emails from fans each day and many of them are touching or memorable. Usually all we can do is say thank you. This case was different — though he’s not the first soldier deployed overseas to write to us, he was the first to explain that he wanted to play the game, but could not due to lack of Internet availability…” Supergiant lead Greg Kasavin told Joystiq, “We went out and got a spool of DVD-Rs and burned him a disc containing the installer for the game … We recently started selling some Bastion merchandise out of our studio so we threw in a Bastion bandana for good measure…that seemed like it might come in useful out there,”