As an editor here at Elder-Geek, I read a lot of reviews. In the last few weeks I’ve notices an avalanche of 2D sides-scroller wading across my screen. We’ve reviewed Scary Girl, Choplifter HD, and Mighty Switch Force all in the last two months. Now that’s definitely not a bad thing. I would argue that side-scrollers create some of the most beautiful and creative works in all of video game history. I’m also a huge fan of this particular style. From Braid’s innovative time-based puzzles to Donkey Kong Returns’ attempt to rekindle a nostalgic flame, and even out to Mega Man’s rewarding trial and error difficulty system. However, I can not in good conscious let so many reviews go by without mentioning one of the most overlooked games of 2011, Rayman Origins.

I’ll be honest, over the past few years I’ve almost written off 2D side-scrollers completely. While still fun, the genre has largely been a place to a dump short, flawed novelties such as New Super Mario Brothers,  a spawning ground for indie developers looking to break into the industry, and “retro” diversions like Cave Story and this generations entries in the Bionic Commando franchise. I don’t think it was wrong of me to assume that the genre that defined the early 90’s wass now irredeemable and a play-style that couldn’t rise above it’s own past glory. I figured we were done with full bodied, innovative 2D games that accomplished everything I’d loved as a kid. Then I played Rayman Origins.

It’s everything you’ve ever wanted from a 2D platformer, everything you remember loving, and the closest thing I’ve come to being a child again. It has single-handedly restored my faith in the genre.

Now give me just a moment. It’s not hard to explain why I love Rayman Origins, it’s just hard to write with this giant smile on my face.

Let’s start with the graphics. Everything in Rayman is hand drawn and absolutely mind-blowing. A variable swash of color painstakingly decorates every inch of every level and is breathtaking in full 1080p. Almost any scene for Origins can be frozen and considered a clever work of art. Never have I sat in awe over an arctic wasteland decorated with cocktail fruit and through to myself, “Man, I would totally put that on my wall”. Not only are the environments varied and exquisite, but the character animations are on a level I’ve never seen. The fluidity that each character interacts with the environment is engrossing beyond explanation. Their expressions and emotions are so well executed that it’s literally like watching a cartoon unfold in front of you. I remember being excited for Wario Land: Shake It! back in 2008. The game looked spectacular in previews but the Wii’s inability to display in HD hampered my dream of a playable cartoon. Rayman not only accomplishes this, but at times had me feeling as though I was playing a work of art. 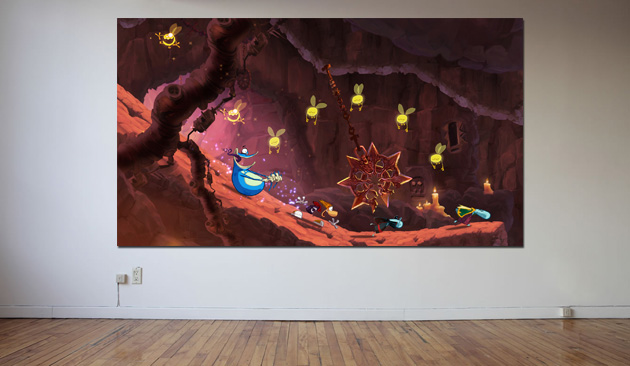 Where the art of Rayman Origins belongs.

The music in Rayman is just as engrossing as the graphics. It’s catchy, appropriate, and frames the scenes with gusto. The dialogue is delivered through incoherent gibberish but the sequences in which it plays are so beautiful, you’ll hardly care. The story is fairly incomprehensible. It seems as though Rayman and his Sonic-like mascot friends that we Americans never bothered to care about are jammin’ out crazy with some snooze melodies and a crotchety couple of old demon grandparents are so tired of the racket that they literally have unleashed hell on earth and taken over the peaceful Glade of Dreams. It doesn’t make much sense, but it’s infinity amusing nonetheless. 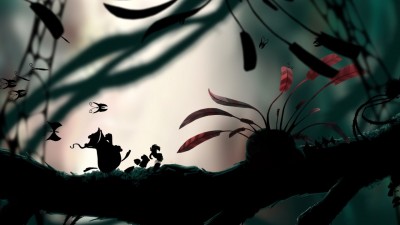 Arguably the most important question is the quality of gameplay. Here, I can only compare it’s accuracy to Super Meat Boy. The levels are designed with meticulous detail to both challenge and reward a player. It’s easy to miss a jump and die, but never unfair. The difficulty cranks up to eleven at times, but nothing is ever insurmountable, and if you die the game rushes you back to the start without the negative fan-fare developers like Nintendo seems to love.

Much like Little Big Planet and New Super Mario Bros., Rayman Origins combines rigid platforming with character interaction, but while the latter games fell into a chaos of tumbling characters and rage inducing collision detection, Rayman remains true to the point of the game: moving though a dynamic environment with pinpoint accuracy. Sure you can still punch your friend off a cliff, but you can also run side-by-side at top speed without hindering each others progress–which you’ll need to do in order to complete the unforgiving time trials set out in every level.

You’ll want to complete those trials, too. You’ll also want to grab every Lum (glowing collectibles in each level) and rescue every pink, ponytailed Electoon in every stage to unlock all the character skins. Every extra is obtainable for those willing to learn the levels, which are designed so spectacularly that they rival some puzzles in Portal. It’s an exercise in obsessive-compulsive level mastery that extends the game’s life well beyond the ending. With each area being uniquely different, weather you’re side-scroll shooting on top of a mosquito, running from a killer thorned monster, sailing on a didgeridoo’s thermals, chasing a treasure chest, or simply running at top speeds through the woods, you’ll want to do it again and again until you’ve done everything as much as the developers will let you.

There’s more reason to praise Rayman than just it’s amazing gameplay, music, and ascetics. It’s a testament to what us lovers of the genre want, and it executes flawlessly. Couch co-op, painstaking development, difficulty, beauty, rewards for exploration, and humor; Rayman gives us back what we thought was lost. I challenge you to think of any other modern game in this genra that takes it’s source material, and fans, as seriously. The game is funny, it rewards you for putting the time in, and it never asks you to forgive it for some fatal design flaw. There are no game-breaking bugs like Fallout or Skyrim, they infuse the world with character and have gone absolutely above and beyond the call of duty to show everyone a 2D side-scroller can still be made to rival the classic yarns of old. Ubisoft are showing us that games can still be made not only for profit, but also for the love of it. Rayman Origins was made for us as gamers. It’s everything we ask for from RPG’s, Shooters, Sandbox Games, FPS’s and all other genres. It doesn’t ask us to forgive it, but we need to ask it to forgive us for letting developers shovel us incomplete, colorless experiences filled with trite stories and gimmicks. Buying this game is letting the industry know that we still have room for what made games great before we started leaving our friend’s houses to a  play with them over the internet.  It shows them that there is an alternative to yearly, unenthused shovelware. I recommend Rayman Origins to every elder geek out there who misses the awe of experiencing an expertly crafted game, and we give it our Elder’s Choice award.