As another year begins, KOEI is ready with another onslaught of Dynasty Warriors titles and spin-offs. Now, I’m not saying that’s a bad thing. I’m actually very excited for it. This time around KOEI kicks off the Warriors year with Dynasty Warriors Next, a launch title for the Playstation Vita. With my fever back in full force, I can easily say that this is one of the better Warriors titles and certainly the best one on handhelds.

If you have ever played a Dynasty Warriors game before, you know what it’s all about. You choose a powerhouse of a character with a huge, impractical weapon that is obviously compensating for something, and you decimate hundreds of enemies on a battlefield with light, heavy, and special attacks. However, since launch titles usually showcase what their new system have to offer, Omega Force has thrown in some new and refreshing elements that utilizes the Vita’s touch screens and gyroscope. These additions, which I will get into later, introduce some new quirks to a series that is often described as repetitious and gives it a little extra spice. 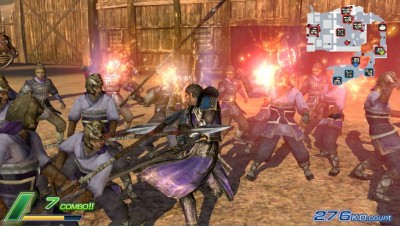 Hackin and slashin all day

All Dynasty Warriors games revolve around the same basic story. The Han Empire in ancient China was at its end and a lot of people started fighting to unite the land under their banner. After all the minor players were snuffed out, China was left with three heavy hitters ushering in the Three Kingdoms era. Instead of choosing a character or a dynasty like in most Dynasty Warriors titles, the campaign jumps back and forth between the Three Kingdoms. In each chapter you see a map of China with your territories and your enemy’s territories, and the object is to invade and take over your foe’s land. Once again, KOEI and Omega Force do a good job of making the story easy to understand and giving personality to most of the high profile characters.

In addition to the story the game has a couple other modes. Conquest mode is similar to the campaign, but it is more free-form on how you can take enemy territory. Each territory has a level, and as long as your territory is a higher level than the adjacent enemy territory you can invade it. You are also not restricted to a set dynasty, and warriors from all kingdoms will join your cause after battles. The cool thing about Conquest is if you play online you bring in data from other players and while you are not playing them online, you are playing against their custom officers.

The other mode is Coalition which is a simple ad-hoc mode where you can locally play game types like “capture all of the bases,” or “defend your area.” Overall, Conquest has much more substance and Coalition would have greatly benefited from online gameplay. 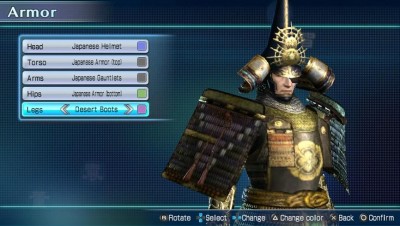 I wasn’t really sure what to expect graphically when I turned the game on, but I was pleasantly surprised with what I saw. Next looks on par with its current generation console counterparts, which means good looking models for the unique characters, lots of the same models for enemies, and some very pretty cutscenes. There is also almost no slowdown unless there’s a lot of stuff going on, but the lack of slowdown comes at a price. There is constant enemy pop-in, sometimes happening right in front of your character. Fortunately, cheap shots rarely occur when the enemies pop up on the screen, so the core gam play doesn’t suffer.

The hard rock guitar music and the comical voice acting are back in full force with Next, and personally, I wouldn’t have it any other way. The sound design has become as much of a staple in the Warriors series as the hack and slash gameplay, and without it the game just wouldn’t be the same. However, since Dynasty Warriors 7 the voice acting has improved by leaps and bounds and that trend carries over to Next. 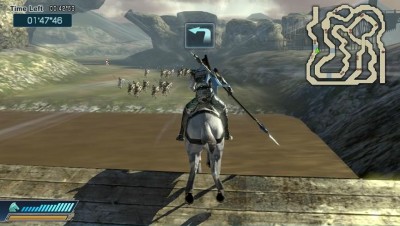 Mini games don’t bring much to the table

The core gameplay of Next remains unchanged from previous versions. You annihilate your foes with a combination of light, heavy and special attacks as you try to take over territory. During combat the main focus is to take over bases while you make your way to the enemy camp. Bases are taken by killing a bunch of guys inside, and they give you advantages such as reinforcements, weapon buffs and extra items constantly spawning in your bases. They also weaken the enemy’s main camp, so it is imperative to take them.

Next also offers some light strategy that usually only benefits on higher difficulties. Before starting a level you can spend some gold on “stratagems” that give you and your army various advantages . You can also use the touch screen to guide a couple officers to attack or defend specific bases. Nothing huge in terms of strategy, but even these are welcome additions.

In addition to the regular gameplay, Omega Force gives plenty of love to the Vita’s touch screens and gyroscope. These come in a few different forms. First are some less than impressive mini games. You have a horse riding game controlled by either the gyroscope or the control stick, a calligraphy game where you use the back touch screen to trace out a character and then write it using the front screen, and others involving shooting arrows and slashing at enemies using the touch screens. None of them are particularly bad, but they’re not very memorable.

During actual gameplay, you can use the touch screen in a few ways. Each character has a special type of attack where you tap the sides of the touch screen and follow the on screen prompt to power up your attacks. You also have a “break” gauge, and when that is full you tap the center screen and instantly take over an enemy base. During some points you will be ambushed by troops and use the touch screen to rapidly tap at soldiers charging you, or swat arrows out of the sky similar to Fruit Ninja. The last main thing you will be using the touch screen for are duels. Usually once per level you will have to fight an officer one-on-one by following the on screen prompts to defeat them. Duels can get a little drawn out when you get to later levels and officers have a stupid amount of health, but all of the in game touch screen elements work well and bring some variety to the game.

If you purchased a Vita at launch, Dynasty Warriors Next is a great title to pick up. Fans of the series will be busy for weeks unlocking everything, and people who haven’t played a Warriors title before will still be able to have a lot of fun with it as a rental. The touch screen elements give the series a breath of fresh air and Next looks good without sacrificing the size of the stages. I’m sure there will be more to come, but as it stands Dynasty Warriors Next is the best handheld Warriors title to date.

5 thoughts on “Dynasty Warriors Next Review”