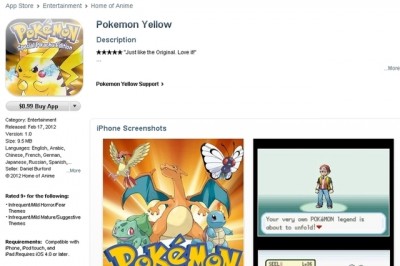 A wall of one-star reviews didn’t stop a faked version of Nintendo/Game Freak’s Pokemon Yellow from blazing through the iOS sales charts in its limited time on the Apple app Store. Customers who purchased the game complained that the game would crash at the title screen. Licensed by House of Anime (the same team behind fraudulent games based on “Yu Gi Oh!” and “Digimon”) the 99-cent app peaked at #3 on the US Store Charts – breaking into the Top 10 sellers in multiple other regions – before it was removed by Apple.

These kinds of faked properties are nothing new to the App Store, which has no precedent for copyright checks in its app approval process, choosing instead to react to any claims lobbed against apps once they are released. Nintendo has yet to release an official statement on the matter.