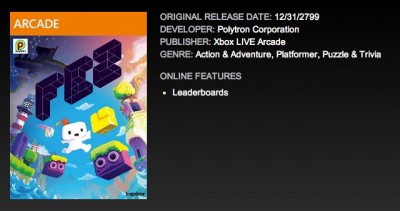 Once in a while, a game so oft-delayed as to be believed to be vaporware manages to overcome its detractors and finally go gold. Fez, the indie puzzle-platformer and co-subject of “Indie Game: The Movie”, is a game that sits atop that stack of software that have gone dormant on the press more than once. In the case of Fez, this meant multiple years of missed launch dates at an almost Valve-like level of unfulfilled anticipation for its fan community. Polytron’s side-shifting adventure will finally hit the Xbox Live Arcade on the not at all maligned date of Friday, April 13th for 800 Microsoft Points ($10).