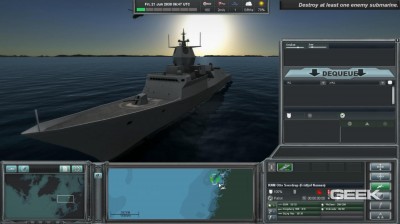 Environmentalist fears of global warming and melting polar ice caps have become reality in the year 2030, leading to the opening of new sea lanes connecting both Atlantic and Pacific oceans and previously untapped resources. With the world in turmoil and starving for new resources, the region is ripe for conflict between NATO and Russia as both factions rush to exploit these new developments. Paradox Interactive brings this fictional conflict to life in Naval War: Arctic Circle where players will control the great navies and air forces of NATO and Russia in order to achieve supremacy in the region.

Naval War features two modes: a single player campaign from the perspectives of NATO and Russia and multiplayer allowing players to fight against each other in a unique matchmaking system. The game features a scenario skirmish mode where players may select standalone missions that explore a wide-ranging spectrum of mission objectives from convoy escorting to seek and destroy. Coupled with its extensive campaign, Naval War will inevitably consume countless hours.

As the title denotes, this is naval warfare on a large scale unseen in the 21st century; the last real contest for naval supremacy between great powers was World War II, with the use of the aircraft carrier being prominent. As players may remember, Battlestations Midway and Pacific recreated this great contest. Naval War sails into uncharted waters by pitting the latest technological innovations in naval, air, and telecommunications into a simulated conflict to see which side would ultimately triumph. 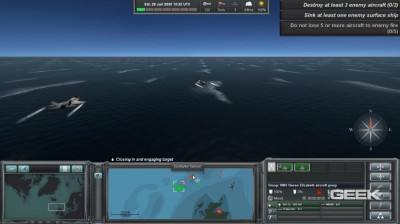 What players will notice is the depth and specific attention to the arsenals portrayed in the game. Players will be able to utilize the latest assets such as surface ships, submarines, helicopters, and aircraft in multiple roles from surveillance to all-out combat with an assortment of weapons including anti-ship and anti-air missiles as well as the traditional main gun batteries characteristic of the past.

Although a naval-heavy game, Naval War will also feature a large air war component, accurately reflecting modern warfare doctrine. That means players will have access to aircraft carriers as well as land-based assets depending on the mission. Players will vie for air supremacy over the naval landscape as well as provide intelligence to navy units on the location of enemy forces.

To supplement the air and sea elements, Naval War also provides land-based targets such as airfields and radar stations, which allows for a more encompassing experience that attempts to expand the battlefield beyond the deep blue seas.

Naval War: Arctic Circle will be a game of high interest to strategy fans who want to play a naval-centric game as there are not that many games on the market like it.