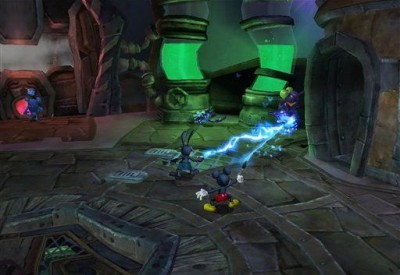 In a recent interview with the Associated Press, game creator extraordinaire Warren Spector let slip the existence of a sequel to his Wii-exclusive paint platformer Epic Mickey. Coming from the same team at Junction Point Studio, Epic Mickey 2: The Power of Two will be a co-operative musical adventure where players can take control of either the titular mouse or his oft forgotten senior Oswald the Lucky Rabbit.

“It’s drop-in, drop-out co-op,” said Spector. “You can sit down at any time with a friend who is playing as Mickey, and you can take control of Oswald. If you’re playing as a single player, Oswald will be there every second of the game. He’s not just a multiplayer character. He’s a helper, whether you’re playing alone or with a friend or family member.”

The key word on this project is “musical”. Both Mickey and Oswald will be fully voiced for the game (this will be the first time ever the Lucky Rabbit has been given pipes) and belt out new material from songwriters Jim Dooley and Mike Himelstein, the team behind the tunes for the upcoming animated Dorothy of Oz. The sequel is also reported to be throwing off console exclusivity for a simultaneous release across the Wii, PS3 and 360.

“We couldn’t ask people to care about this guy they’ve never heard of or no one has ever seen since 1928 in a Disney film,” said Spector. “It was unrealistic to expect people to care in the first game, but now we know they care. We hear about it from players all the time. They really, really got into Oswald, which is hugely gratifying. ”

“I’m such a geek about musicals,” said Spector at the recent Game Developers Conference in San Francisco, where he was honored with a lifetime achievement award. “I love the co-op and next-gen stuff, but for me, when a character breaks into song, which they do on a regular basis in this game, it’s magic.”

Aside from the “Great Mighty Poo” sequence in Conker’s Bad Fur Day, video games and musicals have rarely been conceived of as anything that could mesh. Mostly because when most development teams get behind a rhythm, you get the “Splash Island” chapter from Kingdom Hearts 2. It’ll be an interesting direction – to say the least – to see interactive tunes from the master mind of Spector, even with the work of proven songwriters.

Think the mind behind Deus Ex can make a Disney musical video game, EGs? Give us your thoughts down below!