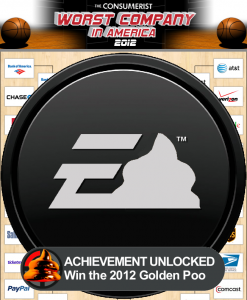 The Consumerist’s public reader poll of the “Worst Company In America” ended with Electronic Arts being sent the Golden Poo Award. Firms like Comcast, Ticketmaster and Walmart were all considered, but the ultimate face-off was between Bank of America and EA. The latter walked away with 64% of the 250,000 votes cast.

While the Consumerist reportedly included the game publisher in the bracket on account of its consolidation of the industry and “nickel and dime” tactics, it’s likely the majority of votes cast against Electronic Arts were the latest manifestation of consumer distaste with Origin accounts. We’re hoping that Mass Effect 3‘s ending didn’t play that heavily into voting decisions.

“Consumerist readers ultimately decided that the type of greed exhibited by EA, which is supposed to be making the world a more fun place, is worse than Bank of America’s avarice, which some would argue is the entire point of operating a bank,” said the Consumerist in its reveal post yesterday.

“We’re sure that bank presidents, oil, tobacco, and weapons companies are all relieved they weren’t on the list this year. We’re going to continue making award-winning games and services played by more than 300 million people worldwide.” Electronic Art’s Senior Director of Corporate Communications John Reseburg responded in a press statement.