A fifteen minute demo that was cut short at the end of my stay at PAX was SUCH a tease for my eyes to experience. That time seemed to just fly by while I was sucked into a super clean, cel shaded world. Who’s excited for Borderlands 2? I know for a fact after that short amount of time getting to play it, I am.

How do you improve on something that already was very immersive game such as Borderlands you ask? You throw more shit at it of course. Now again, I’m going to point out, this was a 15 minute demo, and our time was cut short, a very sad thing. In NO way shape or form is a final verdict or a complete impression on the game itself as a whole. This is what I saw, this is what I experienced, and I’m going to tell you about my first impressions on the demo I was allowed to try. 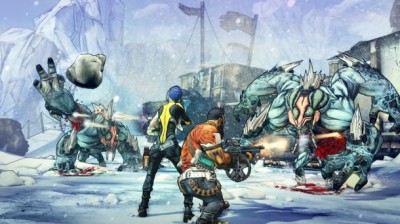 Right from the start Michael and I were set up in a lobby. (That’s right, this was a co-op demo! Oh happy day! Am I right?) There was only one disappointing thing I noticed right from the start of our lobby. There was only two characters to choose from, and as much as I wanted to see what new stuff was offered, we were slightly limited. That is, however, why I made Michael choose the Siren, while I got try out the new class Gunzerker. I couldn’t pass up getting to see some crazy gun toting behemoth of a man running around shooting shit up.

Right away we were thrown into the game, but before we could head off and venture into the outlands, we had to assign a preset amount of skill points given to us. Right away the first thing I noticed was a new menu HUD layout and way to navigate to the skill tree. I must say, it’s a lot easier, and fits the game well.

Skills were set, guns were equipped and Michael and I were ready to set out on our objective. Environments looked a little familiar except for the fact everything was more vibrant. Everything stood out more, and the setting looked a lot more interesting than the usual mountain and Cliffside setting.

We ran into a couple of familiar enemies, dispatching them with ease as we proceeded to the objective. Then the newer enemies emerged, and things got CRAZY. Bright colored slimes and arachnoid monsters attacked, and with weird skills that pulled us in and immobilized us, it became quite the challenge. Firefights became more intense, and it was in that moment I noticed how much more fast paced Borderlands 2 really seemed.

Aside from the pace of the game, the fluidity of the movements on your character and aiming, as well as the UI in the enemies was just plain…awesome. 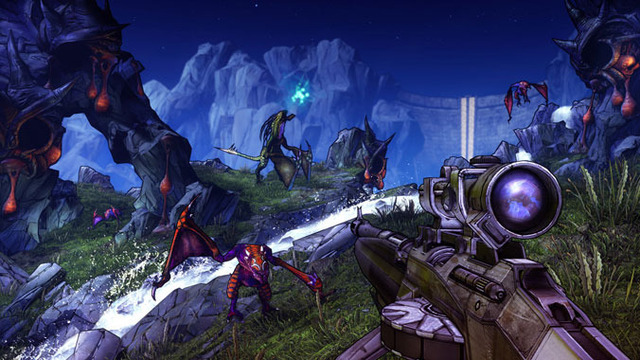 Little did I know, the demo was about to end for us. The ride would soon be over. While in the midst of fighting a large flame spewing slime I figured now would be as best a time to activate the Gunzerkers ability. With a mighty roar, my character used his free hand to grab hold another large weapon. The playing field was now evened as I ran around like a mad man dual wielding two assault rifles, mowing down everything that crossed my path like some bad ass.

Then…the plug was pulled. A bit of a disappointing moment of that day, but the taste I walked away with from Borderlands 2 was sweet.