Neverwinter also known as Dungeons and Dragons: Neverwinter is a Free-To-Play Action MMORPG being developed by Cryptic Studios and published by Perfect World Entertainment. Neverwinter is not a continuation of the Neverwinter Nights series, but rather, a game based in the Neverwinter and Dungeon & Dragons universe.When I first heard about Neverwinter at E3 2011 I almost couldn’t contain my excitement. As a huge Dungeons & Dragons player for the last few years, starting my D&D life with edition 3.5 and now slowly learning and playing D&D 4th Edition, hearing about the prospect and seeing part of a new Dungeons and Dragons themed MMO was like rolling a natural 20 during the final epic boss battle of a 3 week long campaign. If you have never played D&D and have no idea what I’m talking about, I urge you try find a nice group of players and play at least once. The development team over at Cryptic Studios assured me that as fans themselves, they are taking care to remain faithful to the world we D&D players have come to love and adore. 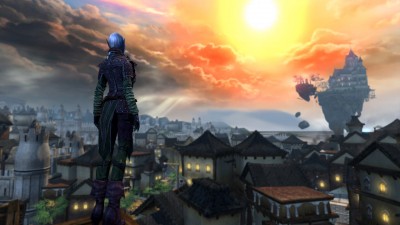 I Often Ponder, "Why Is That Island Floating?"

Taking place in a classic Dungeons and Dragons setting of The Forgotten Realms, players will be able to explore and defend one of the most beloved cities from Dungeons and Dragons, as it rises from the ashes of destruction. Neverwinter will take you beyond the battered walls of the city once known as Jewel of the North, to passageways and dungeons in search of forgotten secrets and lost treasure. Neverwinter’s fast fluid action based gameplay is outstanding and feels very responsive and tight. You are rewarded appropriately for controlling the pace of battle and performing your class’ role with action points to activate powerful spell and abilities. Neverwinter is based on the Dungeons and Dragons 4th Edition so players will have At-Will powers, Encounters, and Daily powers. The more you perform in the way your class should, you build up your Daily gauge. Your Daily is a devastating attack that deals massive amounts of damage, however, unlike traditional D&D you may use your Daily as much as you please as long as you continue to fill your gauge to use it again.

Each zone is themed and will have you fighting back orcs in the Tower District, a burned down, war torn battlefield. Or maybe you prefer the relatively peace and quite sounds of the Protector’s Enclave. “Oh no…”, you say, perhaps you would rather slay unknown terrors in The Temple of The Spider, or explore Mount Hotenow, a massive volcano which is home to the ancient Dwarven city of Guantlgrym. 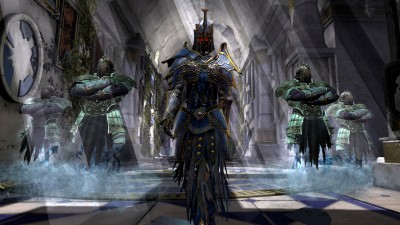 Neverwinter will allow players to jump into the shoes of many classes and races. Of the announced races there are Humans, Elfs, Half-Elfs, Drow, Dwarf, Tiefling and more to come later. For the classes they have only announced the very signature classes core to Dungeons & Dragons; the Fighter – who defends his allies and fights on the front lines with sword and shield, The Rogue – who wreaks havoc among enemy lines with dual blades and high damage abilities, and the Wizard – who controls the field of battle with arcane spells. There are more classes to come, they have just not been announced as of yet. However, seeing how customizable Dungeons & Dragons is, I have a feeling we will possibly see a Ranger/Hunter, a Bard/Healer, and hopefully a Shadowdancer! Who wouldn’t want the ability to hide in the shadows on a separate plane of existence and be able to appear, silently strike, and disappear in to the darkness! 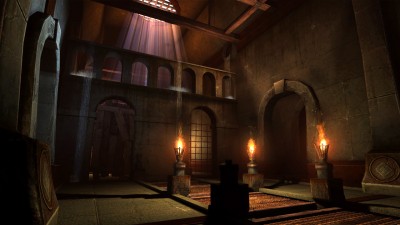 One of the key parts to Neverwinter, in the what Cryptic Studios likes to call The Foundry, is Neverwinter‘s open door to becoming the Dungeon Master! It is an easy-to-grasp creation tool that will empower players to create compelling quests and bring all their D&D campaigns to life without the need of a separate client or tool-set. The Foundry is built right into Neverwinter, thus becoming part of the Dungeons and Dragons experience. An awesome feature for the Foundry is the ability to place your quests or campaigns right into the game for all players to accept the challenge, and hopefully reap the rewards. “Now what about XP given and overpowered loot…” , you say, well the fellows over at Cryptic will be monitoring all the content that is put up on the Foundry to make sure rewards are proportional to the work given to complete said quest and dungeons, and to make sure no giant flying penises make it into your game. From what we’ve been told it sounds like the Foundry will work very similar to how Steamworks has for Skyrim and TF2, giving the community the ability to rate and subscribe to certain Foundry Artists.

The brief minutes we have had to play Neverwinter as left us wanting more. The visual style is superb and easily made my visions of how the city and world would look come to life like never before. Neverwinter will soon be starting their closed beta test.