RaiderZ is a brand new monster-hunting Free-To-Play MMORPG being developed by MAIET Entertainment and published by Perfect World Entertainment. RaiderZ will thrust the player into the now falling kingdom of Rendel, were colossal beasts have awakened to due the contamination of the Prime Stone. Beware though as the line between hunter and hunted quickly blurs in the kingdom of Rendel and you may find your self staring death in the face. 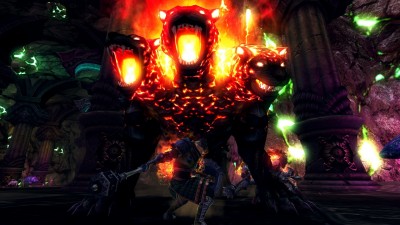 RaiderZ features an intense realistic real-time battle system, where evading and blocking are just as vital as attacking. What sets RaiderZ apart from other similar games such as Tera, is the ability to really feel the weight and force of your weapons behind each attack, evade, and block. Each weapon has it’s own weight which will affect how each player will use them. Big blunt force weapons swing slower but hit hard, while lighter swords might not do as much damage but can attack at a greater speed. It’s a weird sensation but you can almost feel just how heavy the weapons are when playing. It’s almost like you can feel the strain that your character feels as they smash their giant club into a helpless enemy.

The ability to pick up weapons that fallen enemies have dropped and use them for sort periods of time doing massive amounts of damage is totally awesome and unique for an MMO. The weapons you choose to wield in RaiderZ is more or less how you choose your class. Since there is no set classes your choice of weapons and over 350 skills combinations will ultimately decide who you want to be. You can mix sword and shield with destructive magical forces, aid your allies with healing spells, or specialize in wielding two-handed hammers. The choice is yours!

Like any open world MMORPG there will be tons of mobs and creatures to kill along your travels and quests. However the gigantic, intelligent boss monsters is what makes the game truly worth playing. Within the open world of Rendel you will find numerous amounts of boss monsters roaming the land looking to destroy whatever and whoever gets in their path. Each monster is unique and various based on their locations be it from a deep jungle to snow covered mountains with an ever-changing weather system. One example we saw during PAX was a colossal-sized stone golem who wielded a stone pillar that he must have picked up from the ruins of the colosseum area we were fighting him in. 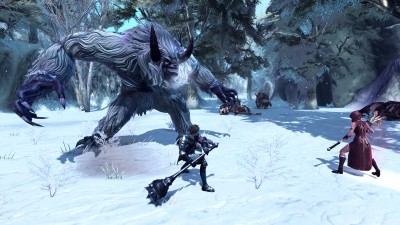 What Big Teeth You Have!

Raiderz is absolutely gorgeous to look at and is hands-down one of the best looking and feeling Free-To-Play games we have seen in awhile. With the alpha test for RaiderZ all wrapped up, the game is now turning to closed beta and we are anxious to get our hands on this ambitious title for a closer look and to scratch our itch for hunting and slaying gigantic monsters!