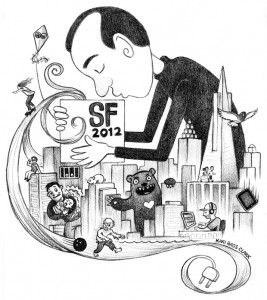 A fan-created poster for the San Francisco "What Would Molydeux?" Game Jam

What began as a parody twitter account has resulted in a global push of creativity, now responsible for literally hundreds of game prototypes designed from Twitter messages. Peter Molydeux, an account lampooning the lavish ideas and proclamations of Peter Molyneux, offhandedly mentioned the idea of creating functional game builds out of the account’s messages with only this past weekend to work with. What followed were livestreamed events around the world (the one in London attended by Molyneux himself) as teams and solo designers got to work over the two-day period.

In the end, an archive of almost 300 playable games has been amassed by Jam organizers Anna Kipnis, Chris Remo and Patrick Klepek. Videos are also expected for a significant percentage of prototypes. Keep in mind these were designed in two days, and when demo’ed at their corresponding events, many failed to load on the first try. Still, it’s only at events like these that you can play working builds of a game where a bird tries to prevent people from committing suicide off the top of its building (it’s called COO, #177).