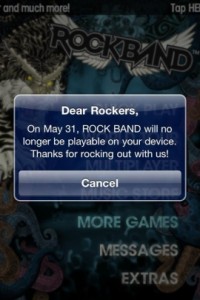 Contrary to the error message players of the iOS version of Rock Band received yesterday, Electronic Arts will not be pulling the music rhythm spin-off from the app store. In a statement to CNET, EA said that the notification was “sent in error”, the company having no plans to remove Rock Band from any mobile device.

“Rock Band for iOS will remain live – the in-app message users received yesterday was sent in error,” read the statement, later attached as part of the company’s official FAQ. “We apologize for the confusion this caused. We’re working to clarify the issue that caused the error and will share additional information as soon as possible.”