In recent years it seems that the traditional puzzle genre has been relegated to cheap Bejeweled knock offs and ugly dollar mobile games. While I can’t say I’ve been paying particular attention to what’s been going on in the genre, I became interested in Bomb Monkey because it looked like it was a throwback to games like Tetris Attack and Puyo Pop. It also helps that it was from Renegade Kid whom already proven their clout on the 3DS eShop earlier this year with Mutant Mudds. Oh, and I really miss book style DS games (think Hotel Dusk or Ninja Gaiden), Bomb Monkey being the first on 3DS to embrace this now classic style.

Bomb Monkey falls in line with the tile matching puzzle games of yesterday, with a few twists to call its own. The general idea is that players are tasked with blowing up blocks before they reach the top of the screen. The player is mostly dropping colored blocks from the sky and randomly they’ll be able to launch a bomb. Once the bomb hits, it takes out the blocks adjacent to it. If the bomb explodes on a block that has same colored blocks near it, that will start a chain reaction and remove those from the field. Large, screen-clearing combos are also a regular sight to see when pink arrow blocks are blown up. These level a column or a row and can then cause further chain reactions from there. The feeling of accomplishment that washed over the player here is extremely satisfying.

That said, these field clearing chain reactions are easy to trigger from the outset and almost make the game feel too easy at first glance. The game has been designed in this way, I believe, in order to make new players feel a sense of satisfaction from the get go. However, once the player reaches Level 10 (levels go up similar to any other puzzle game) the game almost instantly turns evil. It is a noticeable change in difficulty as I can almost see the switch being flipped from “easy” to “hard.” I’ve played for hours and I can’t top my Level 14 high score for the life of me.

I have played enough where I’m at this point while playing where I know exactly when the game hits Level 10 without even needing to look up and check, that’s how obvious the change in difficulty is. The speed of the rising blocks increases, and the appearance of bombs and those pink arrow blocks decreases. While I shouldn’t actually put this into a review, I’m still on the fence about how I feel as far as this difficulty is concerned. I appreciate that the game isn’t wasting my time until it gets hard, but the illusion of me becoming a better player gets lost.

Regardless, I keep coming back to the game because I’m slightly addicted to it, which is obviously a good thing. Bomb Monkey, for better or worse, relies almost solely on getting the player addicted to the core game. Outside of a handful of different modes (Endless, which I’ve been describing above, 3 Minutes, Numbers, Rescue and some cool 2 Player stuff I’ll get to later) there is nothing to unlock in Bomb Monkey, nor are there any quests, achievements, or “story” modes to clear. In other words it’s a no frills game which calls back to the classic puzzle games of yesterday in terms of design, meaning it’s all about getting those high scores. A player could technically see everything the game has to offer in less than 20 minutes, so people looking for a game that shows some sort of progression are out of luck. 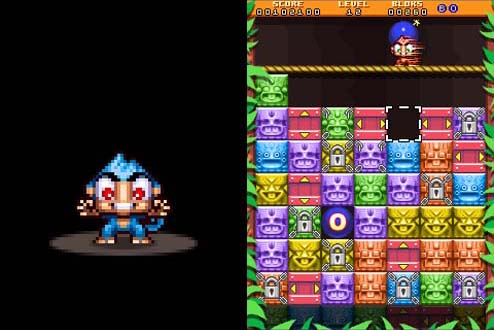 I for one am fine with the decision to keep the design of the game around toppling high scores, but Bomb Monkey fails to make high scores a big deal. There are no leaderboards, and I’m not just talking about online leaderboards either. For every mode the game only saves one high score. While I have been enjoying trying to top my high score, it would have been nice to see how well my other attempts have stacked up, or to even allow for a friend to compete on the same game by allowing some initials to be put in there. Once the player loses a round they’re kicked right out to the menu screen, barely giving them time to see their current score before it’s wiped away forever. For a game so reliant upon high scores, it seems like a really large omission.

Speaking of having a friend play, there are some rather novel two player modes included in the game (Co-Op and Versus) where players can share the same 3DS to play on and literally go head to head. Each player gets their own screen and they’ll use either the DPad or face buttons to control the action. Player 1 still has the option for touch control, but I imagine Player 2 would be highly annoyed as touch control gives the player a distinct speedy advantage. Overall, 2 player co-op on the same 3DS is a very clever and welcome idea.

Bomb Monkey is a curious 3DS game on the eShop. It boldly foregoes 3D stereoscopic effects in favor of the game being played book style. The trade off here is that game welcomes swift touch control and original two player modes. There isn’t much meat on the bones as far as actual content, but the core game itself is addicting enough that it should hopefully offset that for most players. For a unique puzzle game that cost less than the lunch I bought today, it’s worth the trip.