Once again trading in plastic frets for analogue sticks, Rock Band Blitz slipped the franchise back into the weary music-rhythm genre with little promotional fanfare earlier this week. Harmonix is going back to the well they drilled with Amplitude and Frequency (and fell into and broke their leg with Rock Band Unplugged), bringing their eye for soundtrack instrumentation with them. Streamlined to a shine and laser-focused on fostering asynchronous competition, is the track swapping worth dusting off your DLC for?

The goal of Blitz remains much the same as in previous Rock Bands. Jewel icons run down colored tracks representing various instruments playing in your song of choice, hitting which fills up power meters and contributes to your score. Glowing notes still feed into an Overdrive meter, which now powers one of a handful of unlockable power ups. A new, super-speed Blitz mode activates once enough notes are hit in succession. Scores are still measured in both numbers and stars, but each song now bequeaths Blitz Cred and Blitz Coins, which are used to unlock and purchase various power ups for use in each song, respectively.

Rather than occupy yourself solely with a guitar or drum set, the entirety of each song’s music tracks are at your mercy at all times. Switching between said tracks via the shoulder buttons is essential to the completion of any song, and is the pivot point for the game’s more frantic, strategic design. As netting each note in a song is now impossible – and nowhere near as fluid with analogue sticks as they were with colored buttons – the goal here is optimize your track swapping and use of power ups in order to net that ideal gold star ranking.

That habitual feeling of formulaic, mathematical dominance that came with mastering songs via a single track takes a big hit as those dozens of unobtainable notes inevitably rocket past, but a more acute thrill of managing multiple power ups while flying between tracks is a satisfying replacement. Note-hitting accuracy is still important, but can be countered with smart usage of a rocket power up to destroy notes further ahead in the tracks or the use of a computer bandmate to take control of an individual track for the length of an energy bar. Some power ups act as micro-games onto themselves, like a pinball that needs to bounce off you in order to remain collecting points. 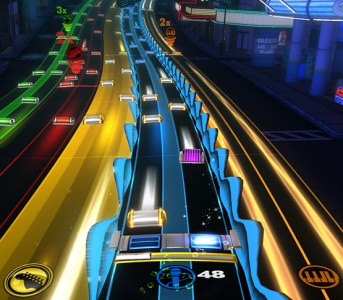 It’s all a lot more fun than it sounds, as score multipliers are now tied to each instrument track, and need to be built up in between multiple checkpoints in each song. Maximizing each track before crossing the thresholds permanently increases each multiplier, but they all are governed by the lowest common denominator. If you forgot to raise the Vocal track multiplier at all before that 1:38 mark, then all track multipliers fall back to zero. Conversely, if drums and keyboards were both at 2x, but bass, guitar and vocals are at 3x, all tracks will increase only by 2 come the next checkpoint.

The result is a noticeably more challenging experience (one difficulty setting fits all), but also a more consistently engaging one. The ability to swap out of that repetitive bass progression into the more erratic drum solo is one that gives Blitz a more immediate joy. Power ups quickly become a personal brand, customizing their layout for each song’s length and style gives a welcome new layer to the process of playing music.

All of this adds up to a much more chaotic, but no less entertaining way to experience the Rock Band catalog. Aside from the 25 songs that come packaged with Blitz (only two of which were seen before, in non-transferable Rock Band 2 form), the game is compatible with every song in Harmonix’s music store, and all Blitz tracks are playable in Rock Band 3. It all adds up to an intensely replayable experience, provided the competitive urge is sustained through your friend’s list.

Because competitive challenges are the sole way to bring friends into Blitz, in the form Score Wars engaged either directly through the game or Harmonix’s Facebook stat monitoring app. The new gameplay format would make real-time multiplayer understandably confusing, but asynchronous challenges puts a drudging reliance on reading stats and menu surfing. The game does it’s best to plaster top scores for songs across every menu screen, but without the pick up and play allure of the core series, it’s hard to see Blitz enjoying the virtual shelf life of its instrument-reliant cousins. Weekly and continuous challenges are also available for groups and solo play on the Facebook app and in-game, but will likely result in the same disconnect for most players.

Rock Band games were never graphical powerhouse, but Blitz‘s scant menu layout and UI interaction makes the experience of getting to a song to play feel rigid and cheap. Tracks still radiate with their respective colors, and buildings on the periphery bounce cutely to the beat, but meter displays feel too small during the chaos of larger solos, especially for the Blitz speed boost. It’s light years from game breaking, but nonetheless occupies that annoyingly noticeable center of the brain. Audio design and instrument visualization, however, still hold up to the impeccable Rock Band standard.

A player’s enjoyment of Rock Band Blitz comes down to a game of numbers. Its replayability is wholly dependent on the number of friends willing to engage in asynchronous challenges, multiplied by a factor of DLC acquired over time. Those that possess a Rock Band 3 disc still spinning in their drive can consider this a common sense DLC upgrade with a bonus game, provided enough songs fit with personal tastes, as the tracks themselves would cost $35 more than Blitz itself if downloaded separately from the music store. As a standalone experience, the more frenetic pace and added strategy easily carry the couple hours it takes to plow through the included setlist. At $15 it is worth the price for all but the most frugal of music lovers, but don’t be surprised if after those first couple hours the soundtrack finds a permanent home in Rock Band 3, with Blitz itself only busted out as the occasional curiosity. 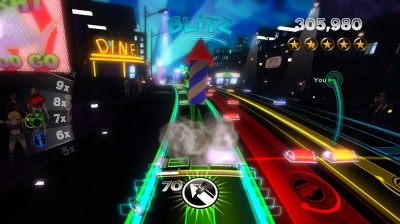