Whenever the summer months arrive each year, we gamers typically use this time to catch up on our long, backlog gaming lists, not expecting any big releases until the Fall and distant Holiday season. Veteran publisher Square Enix in conjunction with developer studios United Front Games and Square Enix London have come out of the closing days of summer with a sudden bang with Sleeping Dogs, an open-world action thriller done in the style of Hong Kong gang and police action movies. Drawing in elements from other open-world games such as Grand Theft Auto, slow-motion gunplay from Max Payne, and racing elements from games such as Need For Speed, Sleeping Dogs is a game filled with nonstop, explosive action.

Sleeping Dogs takes players into the criminal underworld of Hong Kong where the notorious Triads—the Sun On Yee—are in control of various parts of the city through the use of illegal gambling, drug dealing, extortion, and underground street racing. Players will step into the life of Wei Shen, an experienced undercover detective of the San Francisco Police Department, who left Hong Kong as a child to escape the crime-ridden streets for a rosier future in America. Sent back to Hong Kong at the request of the Hong Kong Police Force, Wei Shen must infiltrate the Triad society through the use of his childhood connections and bring down the criminal infrastructure from within.

In order for Wei Shen to rise through the Triad hierarchy, he will need to tread a fine line between crime and the rule of law, doing missions for Triad associates to maintain his cover while helping the police take down the gang-infested streets.

What will dazzle gamers is Sleeping Dogs’ well-executed gameplay. As players will immediately notice, the game features a variety of missions that reflect the two sides of Wei Shen’s overall story. There are three different mission types: Triad, Police, and Favors plus a smattering of mini-games including races, cock fighting, fight clubs, and karaoke. Completion of these missions provides an assortment of benefits including money, vehicles, new clothes, as well as character upgrades that will help Wei Shen to survive in the streets. 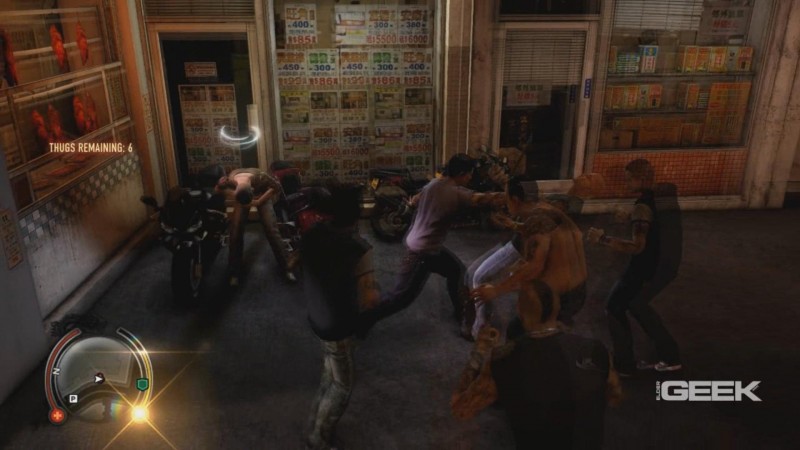 The most notable aspect of the gameplay is the combat system, which involves a heavy mix of kung fu and epic gunplay. Similar to the melee combat seen in Batman: Arkham Asylum, the different combos are just outright brutal as there are many different ways of killing bad guys from breaking limbs to bashing thugs against walls and glass windows through the use of the game’s unique environmental kill feature. As Wei KO’s more thugs, his Face meter will increase, which increases health generation and more powerful attacks that would instill fear on enemies. Another strong aspect of the combat system is the gunplay, which features a cover system coupled with blind fire and matrix-style slow-motion.

The game also does an amazing job incorporating the slow-motion gunplay to the car chasing mechanics, which plays a prominent role in the game creating a dangerous mixture of speed and explosions. While dodging bullets and running from the police, Wei can jumping from one car to the other through the game’s unique action hijack system. The amount of gritty action that Sleeping Dogs dishes out leaves players with one of the most satisfying experiences this year. 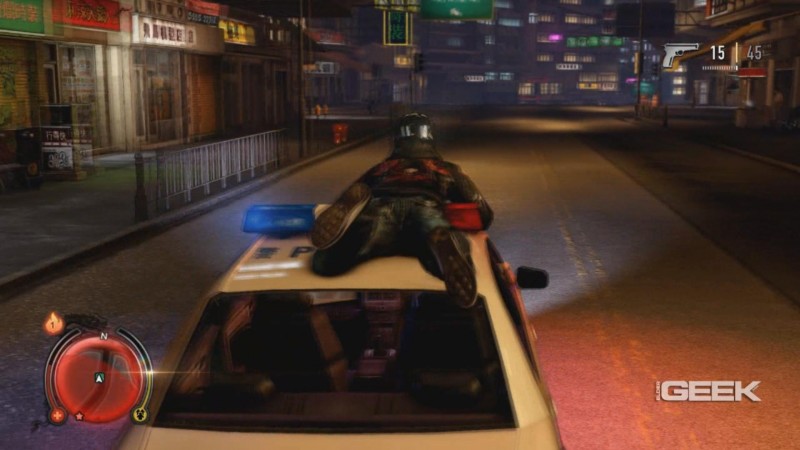 Sleeping Dogs features a few RPG elements, which gives you the ability to increase your killing power as well as deck out Wei with new outfits to make him look like the most intimidating Triad boss in Hong Kong, or you can don the gear of some martial arts movie stars, and destroy your enemies Bruce Lee-style. The game features a varied XP system which provides unique upgrades including Triad XP, Police XP, and Face XP. The first two provide different character upgrades, such as new kung fu moves, improved combat damage as well as improved secondary functions such as stealing cars. Face XP gives the player more respect and grants access to more important people as well as more perks as Wei climbs up the Triad ladder.

Another strong feature is the overall environment of the game. As you walk or drive around the districts of Hong Kong, from the financial district to the back alleys and waterfront of the city, the experience is one of the most interactive. Although some graphical textures are noticeably flat such as character expressions, the overall city experience not to mention the different cars that you will get to drive are well designed. It is a welcome change to be playing in a city outside of the borders of the United States. 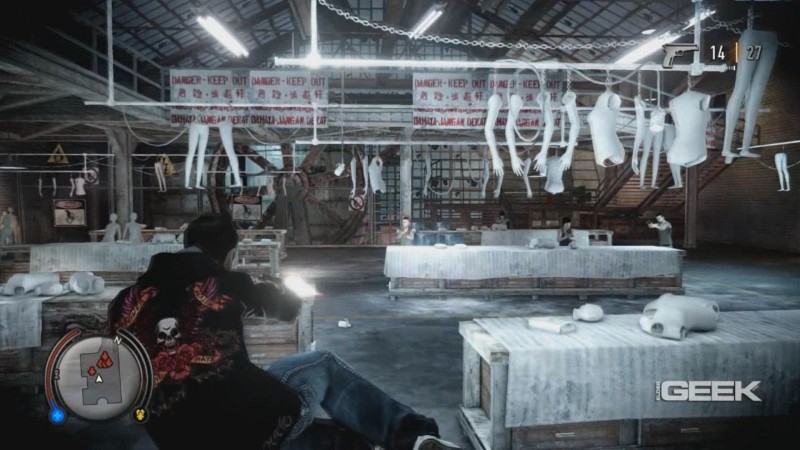 The overall package of Sleeping Dogs is definitely a welcome surprise to the open-world action genre as it takes elements of what made different games great and fuses them to set a new benchmark for subsequent games of the future. Its nonstop action combined with the effective storytelling and open-world environment makes this game like an epic movie. The all-star cast of actors reinforces the movie type feel with names such as Emma Stone, Tom Wilkinson, Kelly Hu, and Tzi Ma. Although there are some issues with graphic textures and the occasional desyncing of voiceovers in the dialogue, it is an all-round solid game that will occupy countless hours to come.