In November of 2009, MMO industry veteran Jeff Strain set out to create the definitive zombie-survival game for gamers with help from his new Seattle based studio, Undead Labs.

State of Decay is an ambitious open world zombie-survival third person action game currently behind developed for Xbox Live Arcade and PC that lets the player decide where and how they are going to survive. As somebody who has personally been following the progress of Undead Labs and State of Decay, back when it was known as Class 3, I was not going to pass up the opportunity to get some hands on time. The setting of State of Decay is one many gamers are familiar with, a zombie apocalypse, but State of Decay doesn’t stop at just letting the player slay hordes of the undead at his will. Players will need to adapt and be resourceful in order to stay alive and keep their community surviving. That’s right, you are not alone during the mother of all zombie outbreaks. You will need to find other survivors and decide either to help them and have them hopefully join your community or let them fend for themselves. I’ll let you guys in on a little secret, helping other survivors and building your community is a far better decision. 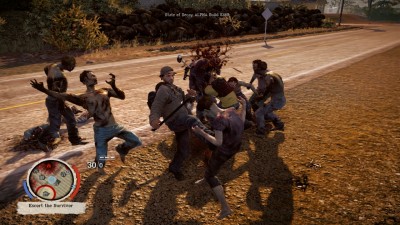 Nothing a quick kick to the chest can’t solve!

In State of Decay you are not stuck playing one character the entire time, player character death is permanent and switches you to another member in your community. Once you run out of community members to play, it’s game over. Each survivor has their own unique traits and abilities that allow them to aid your community in growing and surviving for longer. Some survivors might have been cooks before the outbreak, and thus able to create food and grow items in the garden. Others might have been police officers or military personnel that make them more keen to using firearms and fighting off the zombies. Your community allows you to fortify and build new buildings inside of the compound of your base. You can build things like gardens for food, construction benches for modifying weapons, and lookout towers. 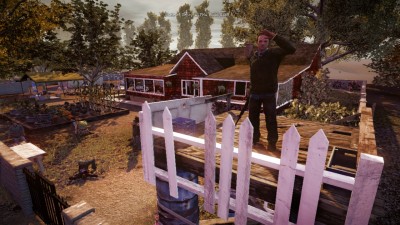 Always on the lookout.

State of Decay‘s dynamic open world is where the player is the most vulnerable. While driving around and smashing into zombies with my sports car car was a total blast, I had to remind myself why I had left the safety of my fort in the first place. I was on a mission to retrieve some supplies from a local hardware store. Before leaving however, I grabbed a shotgun, a small handgun, and a katana. There are a large variety of weapons available in the game from handguns, assault rifles, shotguns, sniper rifles, and melee as well. The melee weapons all have their own unique play style and special maneuvers you can unlock and use to bash your way through the undead. After been mesmerized by the weapons I finally took off for my mission. Along the way I meet another survivor who needed help holding of waves of zombies while she gathered her belongings and supplies. I gladly gave her a helping hand and in the end she asked if she could join my community. Woot, one more awesome member to help out! After some mindless zombie slaying and seeing the power of being able to call in an airstrike on a desired location of brain eating baddies I had finally arrived at my mission location. 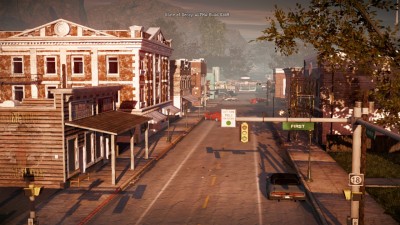 The hardware store was swarming with zombies just itching for a helpless victim to try and enter the store…great. I jumped out of car and let it slam into a small pack of them. They went flying in the air, it was glorious. I then readied my shotgun and went head first into the swarm of zombies in front of the store, I quickly realized my pump action shotgun was not going to cut it, and I was in serious trouble if I didn’t get moving or at least start killing two or more at a time. I frantically switch to my katana in a desperate hail mary to chop off heads and severe some limbs…I was quickly overrun. As I lay there helpless, jamming the “A” button to get back up, I realized I was going to die in this store, and only about 3 feet away from the supplies I needed, damn. As the zombies take their final bites out of me, the screen faded to black and then I found myself playing as the survivor I had just recused. I was a man down but my community was not out yet! Sadly, that is where my time with the game had to end, however if I was to continue on I could have returned to the hardware store and recovery the items my previous character had in their backpack. 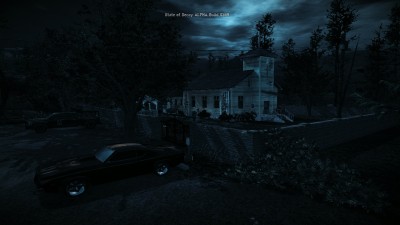 It’s a perfect night for a drive, don’t you think?

Currently State of Decay is a single player game, however Undead Labs does plan to incorporate co-op play into the game after launch. If you’re hoping for a similar experience but on a much larger scale make sure to pay attention to Undead Labs project called Class 4. Class 4 is planned to be the MMO version of State of Decay, and the feedback and responses received from State of Decay will be influencing Class 4. 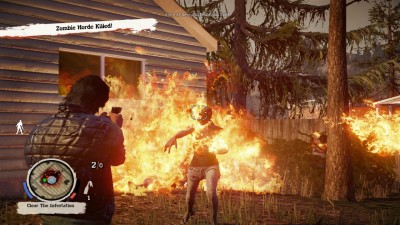 State of Decay is looking to be an amazing zombie survival game unlike anything we have seen or played before. With resources depleting as you scavenge, the ever present threat of zombies, and even a few nasty survivors, the world of State of Decay is one to surely experience.