The makers of Tropico 4 have decided to pack their bags, leave the Caribbean and head to prohibition-era South Jersey in Omerta: City of Gangsters. Prior to release, we weren’t quite sure what to expect of City of Gangsters. In a game that promises to roleplay the life of a crime lord in Atlantic City with X-COM-like combat and Tropico-like city control, we were drooling with anticipation before we got our hands on a copy.

The game is broken down into two segments, city building and turn-based strategy.

While building up Atlantic City, you first need to make underground connections by greasing palms, quenching thirsts, or through intimidation. From there, you discover lots for rent, and currently existing underground businesses like distilleries, breweries, speakeasies, flophouses, casinos, gunrunners and more. If you retain friendly relationships with the businesses, you can buy goods from them, sell goods to them, and eventually, buy them out. If you keep poor relations with them, you can raid their goods, and then kill off the current owners via drive by shooting or you can firebomb the place. That will vacate the premises and leave the lot open for purchase. Sheriff’s deputies and politicians can be bribed to obtain upgraded guns for the strategy portion of the game, shake off investigators, and launder dirty money. 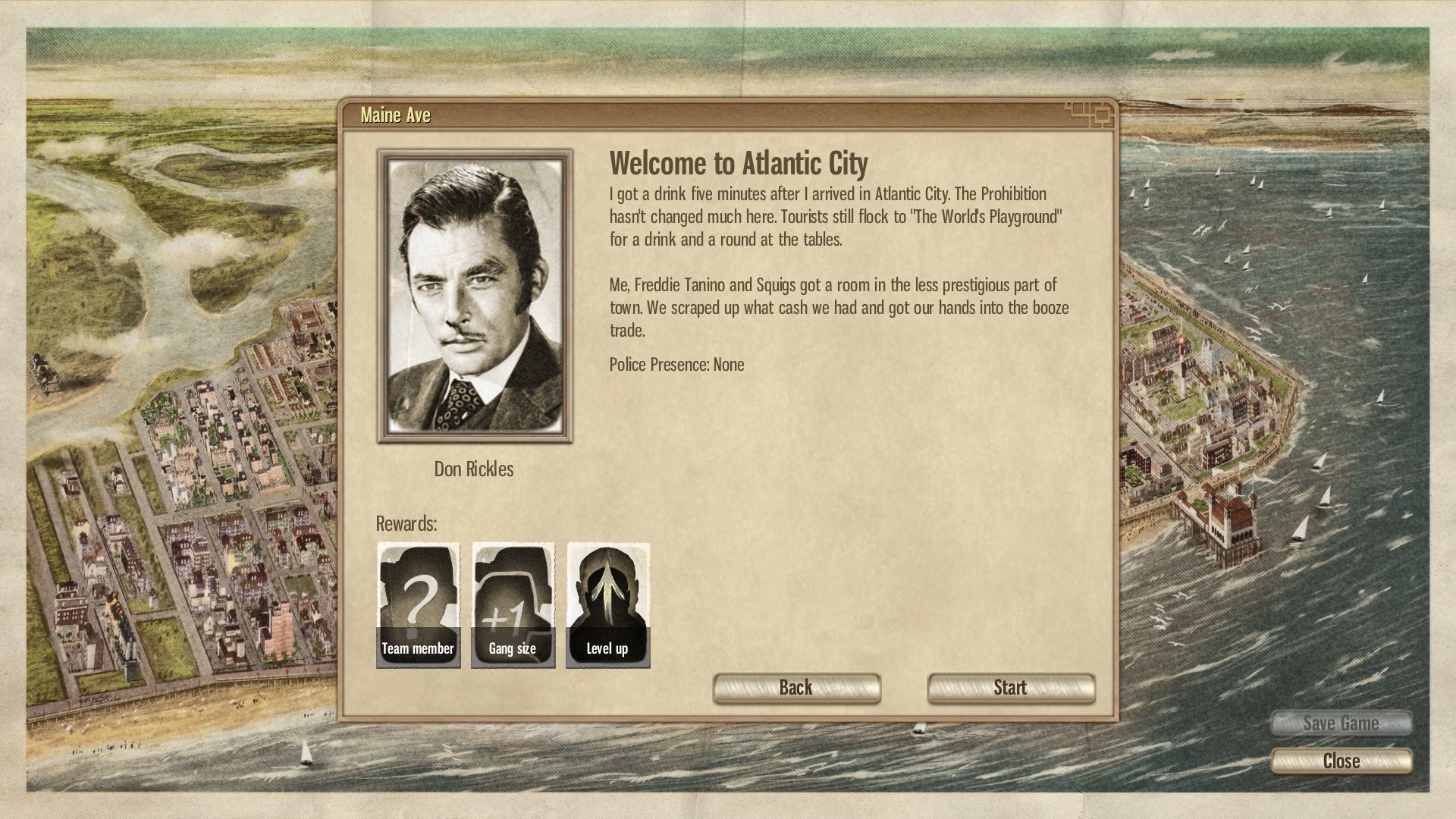 With your own lots, you can open your own businesses in small buildings like distilleries, breweries, and smugglers that will bring in goods that can be sold legally and illegally through pharmacies, speakeasies, night clubs, and pawn shops. Income exists in two forms: dirty and clean money. Dirty money is made illegally and can only be used for illegal services, and clean money is obtained legally. Certain businesses found in large buildings like lawyers, hotels, night clubs, and casinos can only be opened with clean money. However, clean money can be used for anything in the game.

The strategy portion of the game plays similarly to X-COM, but definitely lacks the refined ideas. Your team of 4 are given action points and movement points. Movement points determine how far you can move your characters, and action points determine how many times you can attack. You can outfit your gang with pistols, shotguns, Thompson submachine guns, rifles, and a variety of melee weapons. Strategy missions mostly come in two basic varieties; entering and egressing guarded areas, and eliminate all enemies–sometimes within a set time period.

Omerta has a nice role playing element to it. You start your adventure similarly to Dungeons & Dragons games by selecting a portrait and answering questions to fill in your backstory. At the end of each chapter, the story is fleshed out more and more. Surprisingly, Omerta spins a rather interesting tale, which is nontraditional for a city builder. Experience points are earned for your entire crew after successful combat encounters which can then be spent on individual perks for your six hired gang members.

Omerta also shows off some beautiful period-true visuals. The music is spot-on. And the voiceover work is competently performed. But sadly, there are far too few phrases recorded and subsequently, you’ll be hearing the same lines used ad nauseum. Before the end of our playthrough, we turned off the voiceovers. 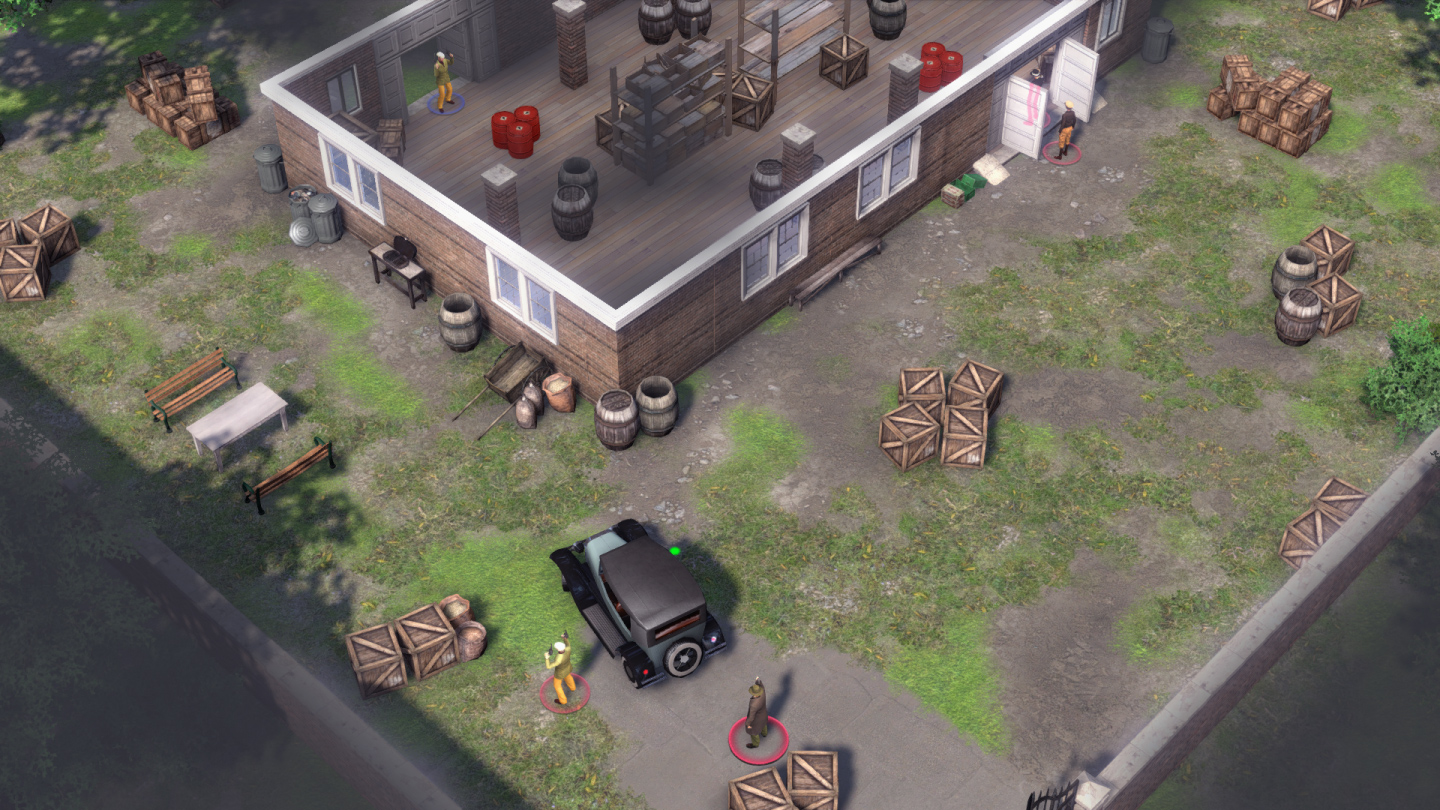 The user interface, from the city building to the strategy portion of the game is rather unintuitive and takes a bit of learning. For example, when you turn a premises into a brewery, it doesn’t gain a brewery icon overhead. It retains its premises icon instead. Some of the building function descriptions are vague at best like the protection and ponzi schemes. And it’s strange that the game distinguishes between a “joint” and a “premises.” It would have been easier (and made more sense) for the player to decide on what to build with smaller lots. The game also lacks a desperately needed fast forward button.

The maps used in Omerta felt entirely too small. They may be true to the locale, and we’re certain the city was sectioned off this way to extend the length of the campaign, but the map could have been broadened to the outskirts of Atlantic City and use Brigantine and Pleasantville as part of the gameplay. But instead, each portion of AC feels entirely too claustrophobic to act as a true city builder.

The biggest problem with Omerta is that most of the game, your largest (and sometimes only) enemy is your own checkbook. Making sure you have enough cash in your savings to pay off law enforcement will get you out of most sticky situations. In the end, Omerta is more about running a business but one without any real competition. There are no opposing gangs encroaching on your territory. While running a criminal empire in reality may or may not be similar to running a business, it’s a far less romantic view of the situation than what we were hoping for.

We enjoyed some of the tongue in cheek moments of the game. Our lead Hitman Mario and his criminal mastermind brother Luigi were always speaking ill of one another even as we were rescuing their little brother nicknamed “Princess.” But the few shining moments the game has aren’t nearly enough to outweigh the game’s largest issue. You have no opponent.

If you’re curious, there is a demo available. We highly recommend checking it out before making a full-priced purchase. Omerta is sure to find an audience. But for us, Omerta was a city full of amazing ideas and nearly endless possibilities, but in the end, none of the ideas felt fleshed out enough for it to be that much fun. And it pains us to say that because Omerta is the type of game we want to love and it’s the type of different development idea we want to encourage. The visuals, the audio, the setting, and the concepts are all solid, but the execution falls short. As it stands, if you pass up Omerta, you aren’t missing anything.