During the Playstation Meeting 2013 held earlier today, Sony finally unveiled the long-rumored Playstation 4, among a host of other tech demonstrations and presentations. Our full summation of the night’s events follows the jump.

Sony Lead Systems Architect Mark Cerny revealed the first details regarding the new console, which he explained to be five-years in the making, with a focus on integrating feedback from developers. At its heart, the console will have an architecture similar to a PC and include a X86 CPU, a PC-esque GPU, a local HDD, and 8GB of unified memory. He also revealed the new the Dualshock 4 (gallery below) which, as rumored, features a rounded design and a touchpad in the center (a full breakdown of the controller, courtesy of Polygon, can be found here). Additionally, it includes a headphone jack, a light bar that allows users to identify which player they are, and a “Share” button that instantly allows players so share content across Playstation Network and social media. The Dualshock 4 will work with a new sensor bar, which is able to locate the controller within the room. 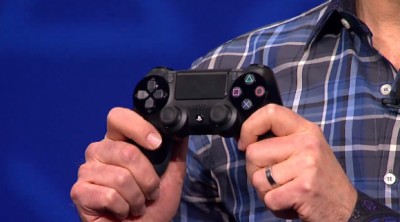 The first title revealed during the presentation is a game that Cerny himself is directing: Knack. The eponymous character is built up out of various particles that can reassemble in various sizes and shapes, allowing the playable to take on roles fitting unique situations. The presentation of Knack followed a tech demo from Havok that showed off a million objects realistically moving in an environment, and Knack appears to be making use of this same technology.

One of the major new features of the console Cerny then revealed was that the system will be able to suspend and resume gameplay. Users will be able to set the console into standby mode and resume gameplay immediately at a later point in time. In addition, the system features a separate chip that is used to run background processes, enabling the user to play games while they are still downloading. This chip is also used in the new always-on video compression and decompression system. Using this feature, players can pause a game and export recent gameplay to a video, stream live gameplay.

The newly revamped Playstation Network will revolve around playing with your real-life friends and integrate into other social networks like Facebook. Players will still be able to use an online alias, but player profiles will now also feature the users’ real names and profile pictures. Besides streaming live gameplay to your friends, players will also be able to take control of your character if you are currently stuck and play your game for you from their own consoles. The Network will also try to predict which new titles you will be interested in, based on your previous playing behavior, and preloads these games onto your system so you can try them out immediately.

Dave Perry, founder of streaming-service GAIKAI, took the stage to further detail services for Playstation Network. One of its new features, is that when combined with the Playstation Vita, players will be able to play their PS4 titles on their handheld when the television isn’t available. It wasn’t clear whether this feature will be mandatory for all titles, though Perry did state that that is their goal. Perry also indicated that cloud gaming technology will be used to bring titles from previous generations to the service, but the platform itself was confirmed to not “natively support” Playstation 3 titles. The GAIKAI-produced features of the Playstation Network are to be released in undefined increments following the system’s launch.

The second title revealed during the presentation was Killzone: Shadowfall, which was shown off during a live demo by Guerrilla Games managing director Herman Hulst. The footage was recorded during the presentation itself and published via the new PS4 Share function. The live demo was followed by a presentation for DriveClub, from Motorstorm developers Evolution Studios. DriveClub is a racing title that was conceptualized over ten years ago, with players being able to race as part of Clubs in both simultaneous and asynchronous multiplayer modes, and drive vehicles from a “true” first-person perspective. 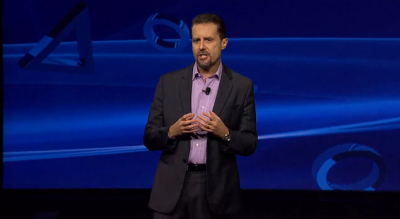 A trailer for inFamous: Second Son was revealed by Sucker Punch Productions’ Nate Fox, followed by a trailer of Braid’s Jonathan Blow next title (and PS4 timed exclusive) The Witness.  David Cage, founder of Heavy Rain-developer Quantic Dream, showed off an additional tech demo of a human head, emphasizing the PS4’s abilities toward higher realism in games. Representatives from Media Molecule showed off new functionality for the Playstation Move controller, which was used to sculpt and control content in their engine. Capcom unveiled a new IP, currently only known by its working title Deep Down. The game is a third-person action title, and uses a new engine developed at Capcom known as Panta Rhei.

Chris Metzen, Senior Vice President at Blizzard Entertainment, took the stage for the first time ever during a console event to announce that the studio is currently working to bring Diablo III to the PS3 and PS4. The game will be overhauled to work with controllers,  features single-screen cooperative play for up to four players, and will be fully unveiled at PAX East next month. Activision CEO Eric Hirschberg then confirmed that the newly revealed Destiny was indeed coming to the PS4, and feature content exclusive to the Playstation platforms.

The night ended with another reference to Sony’s upcoming E3 press conference. The system itself was not displayed which, according to Sony Worldwide Studios President Shuhei Yoshida (via Kotaku), was “…to keep something new for later. Otherwise you’d get bored.” A full list of third party developers working on PS4 content, along with the specs for the console itself, can be found via Sony corporate press release (one for the Dualshock/Playstation Eye and the event as a whole have also been released).