Ever since Dynasty Warriors 4, Empires has become a staple spin-off of the Warriors series. Each time, the formula improves and offers up more strategy while keeping it very accessible for fans of the main series. Dynasty Warriors 7 Empires enters the fray as a PS3 exclusive only available one the Playstation Network. Since the Empires series is viewed as more of an expansion to the main game, one has to wonder if there is enough content to merit a purchase or if fans should just wait until Dynasty Warriors 8. 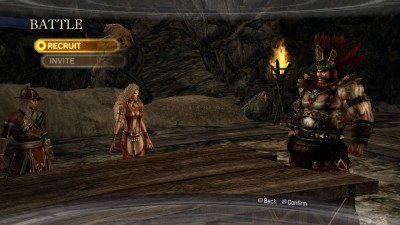 A meeting of the minds

Instead of following the set story revolving around the Three Kingdoms, Empires lets players select an officer and do their part to unify China in a more free-form style focusing on some light strategy elements as well as the hack and slash  gameplay this series is famous for. There are some specific scenarios to choose from, but ultimately the game revolves around unifying China under your banner, or the banner of your ruler. Each game places officers randomly, as well as peppering in a few user created ones, so you’re never playing with the same setup twice.

There are many ways Empires can be played, and each way is quite different. You can choose to start out as a ruler, or work your way up from a lowly vagabond wandering the country. If you’re a ruler or a high ranking position, you will call the shots on who to invade and what to spend resources on to improve your kingdom. As a lower ranking officer you are given missions to complete in hopes of earning promotions. I found the latter to be more fun because even though it does take more time, it feels good earning your position rather than just starting out on top. 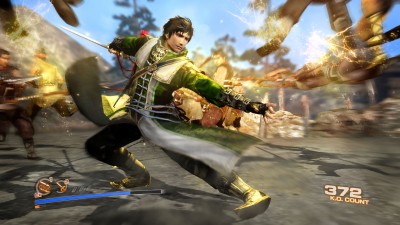 Whichever road you choose you will have to manage three resources: food, info, and gold. Turns go by in months intervals,  and each month you will make choices on how to spend your resources. For example, you can use food to train your troops, or spend some gold to encourage commerce within your kingdom. Don’t expect to fight every month because after a battle you’re going to need time to replace lost troops and possibly form alliances to face a more powerful foe.

The decisions you make outside of battle carry over to the battlefield. Depending on your choices you are given different stratagems to use during battle. An officer focusing on managing his troops will be able to call up a small strike team or cavalry unit, while an officer focused on money management will be able to alter standard bases into bases with better healing items or siege weapons. These stratagems and the strategy stage of the game don’t have much impact on lower difficulties, but if you play on hard and even the later stages of normal, some of them can come quite in handy. 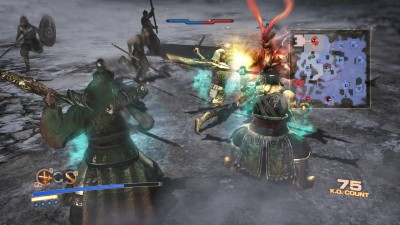 One stratagem summons a couple officers to get your back. It’s very helpful against Lu Bu.

The battles themselves are set up in a territory control format. There are bases littered on the field and it’s up to you and your officers to take control of as many as possible before storming the enemy’s main camp and defeating the officer leading the attack. Again, bases don’t make a huge impact on lower difficulties, but you’re going to want them on hard and chaos mode, especially if you’re outnumbered. The only strange thing about it is that enemy officers often re-spawn after retreating, and if you have all of the bases they spawn in the main camp. At times this makes it overly difficult to take the last base without being annihilated by five or six officers that ignore everybody but you.

The hack n’ slash element remains relatively unchanged. You have a number of different weapons, each with different light, heavy, and special attack combos. This familiar style is still fun and very cathartic, but it’s nothing we haven’t seen before.

If you want to take a break from the stress of ruling your own kingdom you can head to the entertaining officer edit mode. This is where you can make custom officers and upload them so they appear randomly in other peoples’ games. You start off with a select number of different clothing items, and you can unlock more with points you earn from the main game. The best part about it is the sharing option. You can go through a list of officers other players have created and download the ones you like the best. You might even find some famous characters from other games. 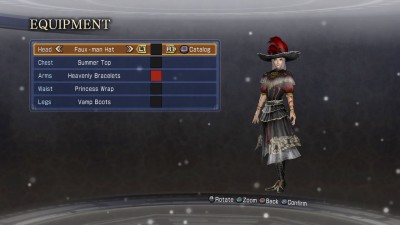 The officer edit mode has some over the top choices.

Graphically, Empires is on par with its predecessors. There are a couple new weapons and even a new character in this outing, so that’s a nice surprise. Like the other games, the important characters are all detailed and different from each other, but the common troops are as bland as ever. The load times are also fast, but pretty frequent. There have been a few instances of loading the next month, only to immediately load a cut scene, and load up the month again afterward. There has to be a more efficient way to do that.

English voices are absent from Empires, and it makes me a little sad. Just when the voice acting was getting to be a little more respectable, Koei decides to not include it for most, if not all of their recent downloadable titles. I’m not saying the Japanese voices are bad, but the English actors do bring back some good Dynasty Warriors memories. On the bright side, the soundtrack is very extensive. While there are no new tracks, crazy guitar tracks dating all the way back to Dynasty Warriors 2 can be enjoyed while effortlessly laying waste to your enemy.

For the Warriors fan that wants to be able to strategize a little more, Dynasty Warriors 7 Empires is as close to combining the two genres as it comes for now. Empires offers up a surprising number of choices to make while ruling your kingdom with a seemingly infinite number of outcomes. Even serving under someone and working your way up is fun since you can influence your ruler’s decisions and possibly overthrow him. If you’re done with Warriors Orochi 3, and need another fix before Dynasty Warriors 8, Dynasty Warriors 7: Empires is a good buy with plenty to offer.