After only having to wait eight months between StarCraft and Brood War and one year between Warcraft III and The Frozen Throne; one could come to the conclusion that the over two and a half years between Wings of Liberty (WoL) and  Heart of the Swarm (HotS) would lead to the biggest RTS expansion from Blizzard yet.  Time to find out of the hype train for one of the most anticipated expansion packs in history arrived on time or should have taken that left track back at Albuquerque.

On the whole, what you’re getting out of HotS’s multiplayer is exactly what you’d expect given the prior expansions for the original StarCraft and the Warcraft series.  New units and abilities!  Don’t expect a plethora though.  For you Terran players out there, you now have the flame spraying hellbat and some little burrowed monsters called window mines.   Zerg players will be introduced to their new units during the campaign, and they are the locust spawning swarm host along with the unit gripping viper.  Protoss on the other hand were improved entirely through the air with the additions of the support based oracle and the siege focused Tempest.  This goes beside with the countless balance changes that have been implemented to the multiplayer since the release of WoL.  Balancing multiplayer with these additions is the single biggest reason it took so long for this game to be released.  Changes like allowing siege tanks to have siege mode without it needing to be researched anymore quickly add up and combine for months of testing to hammer out. 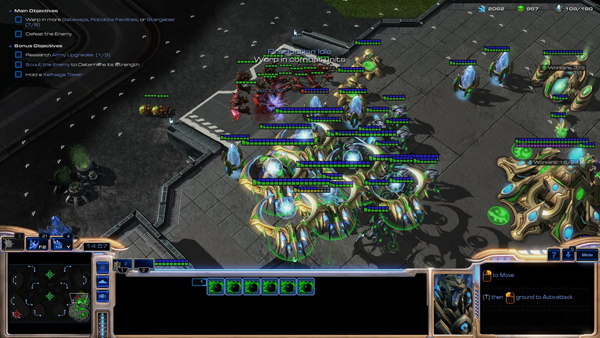 Here’s the training mode and some new Protoss units.

Other additions to your online experience include being able to play unranked games for those of you who don’t like being judged according to a league of play.  There’s also been the inclusion of a leveling system similar to what you’ve seen out of other games such as League of Legends.  Some were hoping for the old school Warcraft III leveling system, but this one appears to be based entirely around how much you play and even rewards you for playing against the computer.  Right now leveling allows for decal unlocks, portraits and a few new skins for your units.  Hopefully they will expand upon this in the future, but for the moment it remains a nice perk.  Outside of this, a tutorial guide called ‘training’ was added to help players learn the basics for playing each of the factions.  Nevertheless, that’s about all it serves as since playing against a human is quite different than an AI.  Other than this there’s been some graphic overhauls to the SC2 experience, but these were started before HotS and don’t require it.

The singleplayer is largely where this game is going to rise up for fall down due to the nature of expansions being largely about added content in this venue of play.  A few new units and some changes to balance in multiplayer while difficult to implement and drastic in impact, are not the bulk of “fresh content” than an expansion pack brings.  The reason Blizzard gave that StarCraft II was split into two expansion packs instead of one was so that we could have more story and overall content in the campaign.  Unfortunately by the end of your first playthrough you’re going to find that waiting two and a half years for the amount delivered has you scratching your head.

To get straight to the point, WoL has a total of twenty-nine missions for you to play.  HotS boasts a meager twenty in comparison.  That’s almost a third less game.  After such a long wait and the reasoning behind splitting up the game, this wasn’t what was expected.  The original StarCraft has thirty missions and Brood War has twenty-eight.  Why they dropped it to a mere twenty befuddles me.  This was exacerbated by finding points in the game where you could have seen some more missions thrown in to help strengthen the story and help sew things together.

The awesome feature in WoL of being able to branch between one of two missions that would each have a unique impact on your story is gone.  Due to this you don’t have to live with the impact of these choices when possibly pertaining to gameplay.  A good example being the choice between fighting nydus worms or air units in the final mission of WoL due to a prior mission choice.  In fact, the final missions for HotS felt quick and anti-climactic compared to the prior game.  The final mission itself couldn’t remotely measure up to the tension of WoL’s on Brutal or the it’s corresponding mastery achievement.  Therein lies one of the biggest faults with HotS.  The difficulty.

For starters, you now play the self proclaimed Queen of Blades (Sarah Kerrigan) throughout the game, with only two missions where she’s really out of your control.  Hero units have always been pretty cool in Blizzard games, however in this one she has the power to literally walk over any map.  If you have the ability to multitask her along with macroing your base you will find every single mission, regardless of difficulty to be relatively simple.  She’s simply that strong.  Now from a story perspective, I can’t fault the power she has.  Her talent tree is pretty neat and the fact you can swap in and out of talents on a per mission basis was a pleasure to see.  Still, in WoL she was insanely powerful, and through the campaign it’s explained that she’s supposedly even stronger than she was before.  When it comes to gameplay, while awesome, it simply hurts the experience for those wanting a challenge. 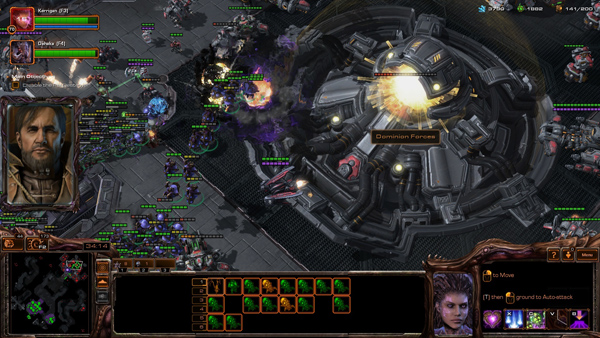 It’s as easy as one, two hundred!

From a unit standpoint balance also gets a bit out of whack with the use of Corrosive Acid upgraded Hunter Banelings.  Destroying objectives is extremely easy with this unit and due to the abundance of resources you can couple this with Swarmlings along with the Spawn Baneling and Zergling Reconstitution abilities to simply role over everything your path in any mode of difficulty.  No jokes.  Even on Brutal as you’ll see in the above screenshot, all you have to do is clear a path up until you’re relatively close to your mission objective, make a bazillion Hunter Banelings and it’s game over, you win.  Speaking of a unit standpoint, it’s important to mention that Zerg play differently from multiplayer.  There are no larva injects from your queens and  corruptors are not in the game.  As in WoL, almost all of the unique unit upgrades are not available in multiplayer and for good reason.

Speaking up upgrades, the use of currency to enhance your units has been replaced with one of the most mundane features imaginable in the form of glorified tutorials with tons of repetition, no difficulty and little substance attached.  They’re called evolution missions and there’s seven of them.  They have no achievements.  No difficulty setting.  They are simply filler and should have been replaced by more campaign centric missions.  It must be stressed that there is absolutely no point to them, as the in-game videos for your three swappable unit upgrades was perfect and would have more than sufficed to have the same thing for choosing which evolution to unlock.  While it makes sense that Zerg would not use monetary currency like Terrans to buy upgrades, they could just as easily used a form of currency such as biomass or essence to do the same thing.  These tutorial missions are the big downside of a campaign playthrough. 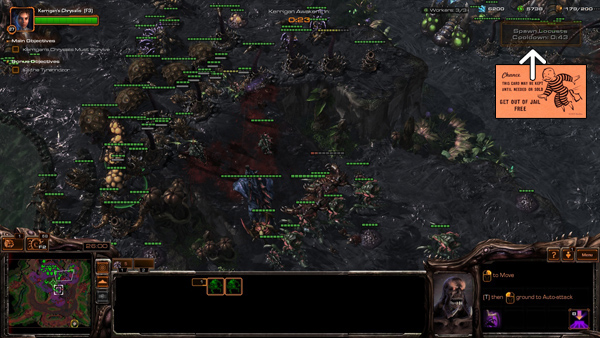 Get a wave mission without the Queen to save the day? Don’t worry, there’s a button for that.

There is an ability to avoid ever doing them again though! This comes from the addition of the helpful master archives.  Through this you have the ability to go back and play any mission on any difficulty and in the absolute best setup possible going into it.  What this means is you can select any evolution strain or upgrades for your units on a mission by mission basis rather than just having a cemented choice for evolved units as you would in a campaign playthrough.  On top of this Kerrigan will always be at her strongest on any mission you chose provided you obtain all her previous upgrades.  For you difficulty junkies out there, I’d suggest avoiding this though and doing a fresh campaign as it does make Brutal missions far easier when you have these options.

When it comes to story, spoilers isn’t something we here at Elder-Geek really like to do, so this will be as vague and free of them as humanly possible.  What can be said is that there comes points in the game where you may bring your palm to your face.  Some characters feel thrown in, literally.  As in they were just placed in a mission or two just so you could see their face and give a fist pump.  The emotional response of some characters doesn’t really line up with their actions later on and in some cases feel overly emphasized.  Unfortunately, the newly introduced Zerg characters aren’t that memorable and nothing really interesting happens with any of them.  In short, the character development could have and should have been far better. 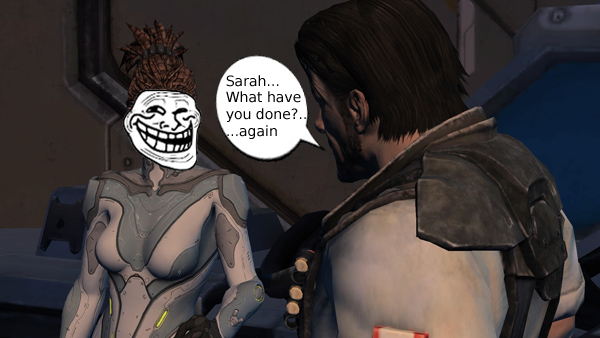 How many times has Jim said, “what have you done?” in a cinematic?

A lot of ragging was done on this expansion pack, but it was well deserved given the prior game it was being held against and the time it’s been in development.  That said, when you add up everything the experience you do get  is worth the $40 to upgrade from WoL.  It was fun playing it and neat to see where the story was going, albeit being a bit overdramatic and cliché.  The cinematics are as cool as ever and once again people will ask why Blizzard won’t make a movie.  If you don’t play the campaign in search of a challenge then a lot of what this reviewer found disappointing will not bother you in the least.  Still, the mission count should get you upset as we all deserved more than we were given.  Here’s hoping that Legacy of the Void takes the best from both WoL and HotS to cap off StarCraft II with a bang.