Luigi’s Mansion was a curious launch title for the Gamecube. Instead of a fast moving 3D Mario adventure, early adopters got Luigi casually strolling around a haunted house with a vacuum. Thankfully the game is much more fun than I make it sound because you are capturing ghosts and solving some clever puzzles with said vacuum. Now, years later, a sequel arises for the 3DS, but can it capture the same magic as the original? 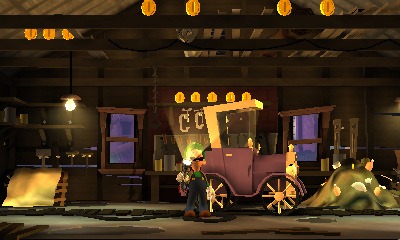 One of the first rooms you enter

In Luigi’s Mansion: Dark Moon, players take control of Mario’s less than famous brother in a part action, part puzzle solving adventure. Like a true Ghostbusters copy cat (seriously, one of the characters actually uses the term “containment unit”), Luigi uses his vacuum to suck up ghosts and solve the various brain teasers the mansions have to offer.

This time around, Professor E. Gadd, the scientist who designed Luigi’s vacuum, is distressed because the happy-go-lucky ghosts he studies have become violent. A mysterious floating gem called the Dark Moon suddenly shattered, and it turns out this gem has been pacifying the ghosts. It is now up to Luigi to make his way to five different mansions to recover each piece of the Dark Moon despite the fact that he is, in fact, afraid of all ghosts. The story is simple, but fun; and there were multiple instances that made me laugh.

Dark Moon plays similar to its predecessor, but there are a few new things specific to the 3DS sequel. There are three main things you will be doing in the game: exploring, puzzle solving, and of course, ghost capturing. 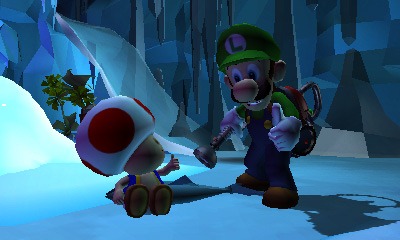 Don’t be fooled! You are not escorting Toad, you are using him to solve some of the more clever puzzles.

Unlike the first Luigi’s Mansion, Dark Moon is broken up into stages. Each of the five mansions has anywhere from 4-6 stages and each stage either unlocks more of the mansion, or opens and closes specific parts of it. Each mansion is themed after a specific thing, such as a science lab or an old mining facility, and they are all really interesting. The mansions have a ton of secrets for you to find including Boos to capture and gems to discover. The fact that each mansion is broken up into levels hiccups the exploration a little and makes you backtrack some, and the game tries to hold your hand a little too often with the constant interruptions from E. Gadd, but each mansion is so unique that you won’t mind going through the same rooms a few times just to see if you missed anything.

Early on in Dark Moon you are given a new add on to your flashlight that lets you reveal things that the Boos turned invisible. This made me think that each mansion was going to introduce new tools and by the end you would have an arsenal that rivaled Batman’s utility belt. Unfortunately, the flashlight add on is the only new tool you get, and if you can’t figure something out, odds are you have to shine that specific light to make something appear. This makes the puzzle solving get a little bland, and since most of the puzzles revolve around one of the three tools you have, none of them prove to be too difficult. 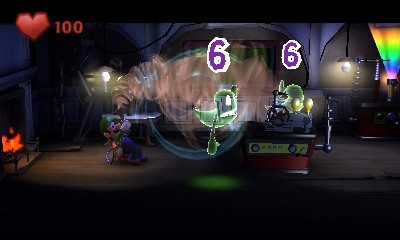 Once that number hits zero, consider yourself busted.

Ghost catching is easily the most fun and cathartic part of Dark Moon. There are plenty of different ghosts that all have different attacks, but the strategy always comes down to blinding them with your flashlight and reining them in with the vacuum. The only time it gets mildly frustrating is when you’re in a small room with a ton of ghosts because if a ghost scares you your grip on the ghost you’re trying to capture breaks, and when that happens a few times in rapid succession it can get on your nerves a little. The boss fights are a happy medium of ghost capturing and puzzle solving, and most of them walk that fine line of being challenging, without feeling like a chore. The only downside is that once you know what to do you essentially just have to do it three times, so it can get repetitious. 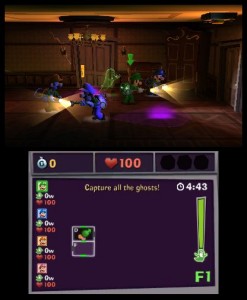 In addition to the long single player campaign, there are also multiplayer options in the form of hunting ghosts, quickly finding your way out of a mansion, and trying to capture all of the mischievous ghost dogs, or “polterpups”. These modes put multiple Luigi’s in a less lively mansion, and let you run around and catch ghosts. Multiplayer doesn’t really add much to the experience because the levels are not nearly as interesting as the single player mansions, and there is little to no strategy required to finish most of them. Odds are you’re going to try it briefly, and go back to the single player to try and find the Boos you missed the first time around.

Dark Moon is one of those games that doesn’t need cutting edge graphics to excel. Like I said before, each mansion in the main quest is incredibly detailed and genuinely fun to explore, and the cartoony graphics that have become the standard for Mario games gives the mansions and the ghosts their own personalities. The 3D is just about useless though. The game gives you an option to use tilt controls to look up and down, and at some point you’re going to use them. This means that if you have the 3D on it’s going to go all wonky because you’re not looking at it exactly right.

Next Level Games decided to keep the creepy music from the first game, and it fits right in. It is just one tune, but it changes based on the environment. Surprisingly, it never gets old. They also kept the button that let’s Luigi call out various “Hellos” and “Yoo-hoos”. I thought that was a nice touch simply because of the “Maaaaario?” button from the first game.

Despite some minor flaws, Luigi’s Mansion: Dark Moon is a quality first party title. While the puzzles are a little weak and the lack of gadgets disappointing, the mansions themselves bring the game to life, and ghost wrangling never seems to get old. It also doesn’t hurt that the game will last you a while, especially if you collect everything. If you’re looking for a new game to play for your 3DS, Dark Moon is a worthwhile purchase.