In an exchange that instantly shot to the very peaks of Reddit (although first collected by NeoGAF), Microsoft Creative Director Adam Orth suggested to gamers complaining of the possibility of the software corporation’s next console requiring a constant internet connection to “deal with it.”

When Twitter user (and Bioware employee) @manveerheir pointed out the negative reaction to recent DRM fumbles Sim City and Diablo III, Orth dismissed the claim by stating that “electricity goes out too”, and when it was suggested he live in less populated areas (such as Janesville, WI) to experience shoddier internet connections, the Creative Director asked “Why the hell would I want to live there?” In a separate, larger collection of posts (below) comparing the argument against “always on” technology to someone not wanting to buy a vacuum cleaner because their electricity goes out occasionally, Orth suggested gamers should simply “get with the times and get the internet. It’s awesome.” 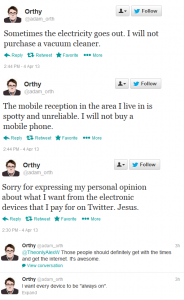 The dialogue has prompted an immediate and universal negative response, although how far beyond social media circles the sentiment will breach has yet to be determined. Microsoft Corporate has not yet spoken on the exchange, and has yet to confirm whether it’s next system will actually include such functionality.