Editor’s Note: This is a review for the recent HD rerelease of Resident Evil: Revelations. For the 3DS version of our review, please click here.

The developers behind Revelations have obviously done their homework and read all the complaints fans have had about the newer entries because Revelations feels like a mix of 4 with some of the classics in the series.

A carry over from Resident Evil 5 is the near constant AI controlled partner. However, Revelations wasn’t developed around co-op, so none of the annoying puzzles get in the way, nor does the second character need any assistance during battle.

The combat has received an overhaul as well. For a series first, players can now finally shoot while walking. Much like the Dead Space series, the running and gunning is more slower paced, so it doesn’t break the flow of the game. The game doesn’t turn into Gears of War or Uncharted. It still feels like Resident Evil with plenty of intense moments of being overwhelmed in the heat of battle, which is a good thing. Players can also dodge incoming attacks, but getting used to the maneuver and pulling it off when necessary can get a bit tricky.

Controlling Revelations on the PC with the keyboard and mouse is incredibly intuitive, using standard first person shooter controls, for the most part. Aiming can be a bit janky, which is frustrating when you’re used to the precision of a mouse. Rounds can sometimes hit invisible walls around objects in the environments, and shooting through open shelves is completely out of the question. We were forced to dial down our mouse’s sensitivity a bit to feel fully comfortable with the controls. Hitting TAB quickly doles out green herbs on the fly which is a wonderful change from needing to dig through your inventory to find some healing. The inventory system is handled so well, we only dug around through our gear at crates in safe rooms to upgrade our equipment.

Revelations upscales respectably to high resolution monitors, but there are a few low resolution textures that will jump out at the player from time to time reminding you that, “yes, this was once a portable title.” Players coming from games with amazing physics and water effects might feel like they’re going back in time a bit when playing Revelations, but that shouldn’t stop most people from enjoying it. The character models have been reskinned very well.

Revelations does a nice job of mixing the action heavy moments that have come in the later games along with some creepy moments from the series past. While most of Revelations takes place on a large ship where players are in control of Jill Valentine, it still manages to give several visual cues back to the original mansion. 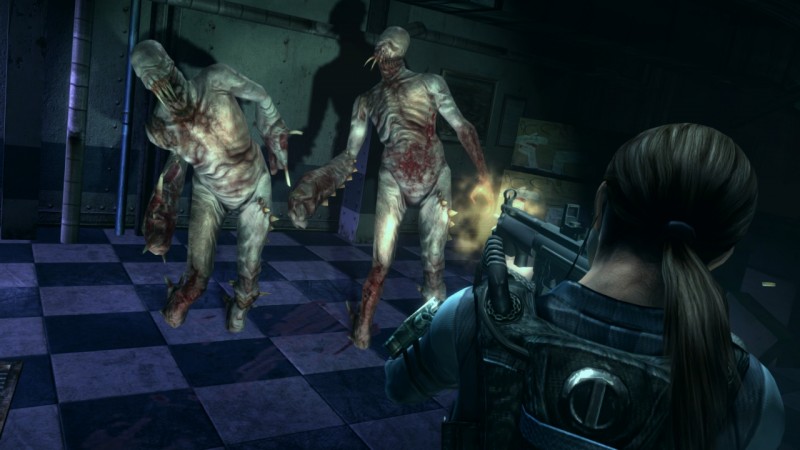 Ammunition is limited, with just enough to go around. Through most of the game, you don’t need to scrimp and count bullets, but it doesn’t hurt. Players can use a Metroid Prime-like scanning device to locate hidden items in the environment while scanning enemies (dead or alive) can result in a few extra green herbs in your inventory.

Although the ship is laid out more like a map out of Metroid, the game is broken up into bite-sized episodic chunks very reminiscent of Alan Wake, each taking up about 20 minutes apiece. While that methodology is great for portable gaming, the constant breaks in the action might be jarring to PC and console-centric players. Players control characters other than Jill at different times of the story where the action is more focused and linear, nicely breaking up the pace in an obvious attempt to bridge both styles of Resident Evil games.

When playing as Jill, players have the opportunity to customize their guns with add ons that improve their stats. These range from being able to hold larger clips of ammo, more damage, higher stopping power, or increased percentage of critical hits.

We wrapped up the campaign in a respectable nine hours, but it wouldn’t be Resident Evil if it was light on content. Revelations has a unique extra called Raid Mode. These extra missions all take place in familiar locations, but the game switches gears to a faster paced arcade mode. Players have the ability to level up their characters and have the chance to dive into the gun modifying mechanics introduced in the Jill stages of the campaign. To sweeten the deal a bit more, this mode can be played co-op through the Steam network.

Resident Evil: Revelations is a legit Resident Evil game that could have been a numbered entry in the series. It’s worse than 4, but better than 5. Between the low poly environments, low-rez textures, and 20 minute episodic storytelling, the game constantly reminds you that it was once a portable title, but there is some quality content to be found if you’re gamer enough to see past its inequities. There is a demo available. It’s worth a try if you haven’t already had a chance to give Revelations a go on your 3DS.