After knocking out a healthy 16 hour campaign in a game called The Incredible Adventures of Van Helsing, you’d think we’d have our fill of vampire slaying.

You’d be wrong. Nary a vampire was hurt in the creation of TIAoVH. In fact, there is something downright criminal about the absence of vampires in a game featuring the Van Helsing clan. At the very least, you’d expect the final boss to be a vampire. Whatever the cause for this shocking absence in the blood-thirsty undead, Van Helsing still manages to be a pretty decent game. Action RPG fans who enjoy the Diablo, Sacred, Titan Quest, and Torchlight series might want to put Van Helsing on their list.

Taking place in the fictional land or Borgovia, Van Helsing pits you and your spirit sidekick against hordes of monsters, abominations, mythical creatures, and a healthy spattering of nefarious steampunk automatons. For those who have never played a Diablo-like RPG before, you simply point and click to move and point and click to kill. Spells, special skills, and healing tinctures can be accessed through a convenient hotkey system using the WASD keys. Killing enemies grants experience points along with the chance of dropping loot in the form of cash or weapons and armor.

Van Helsing has two primary forms of attack: ranged attacks using firearms like pistols and rifles, and melee attacks while dual-wielding swords or using large two-handed swords. Switching between the two styles is done with the R key. And casting magic is as simple as right clicking. Van Helsing also has a Rage meter that can be unleashed when full by pressing the space bar to lash out at your foes with excessively brutal attacks when you become surrounded and outnumbered.

And you will be surrounded and outnumbered.

Experience points can be spent on buffing up Van Helsing’s special moves, magic, and his skills with firearms and blades. There are plenty of upgrades available to the player, and though there is only one character to choose from when playing Van Helsing, that shouldn’t stop you from creating custom ranged, caster, or melee-type characters.

Van Helsing’s quirky sidekick, Lady Katarina (who just so happens to be a spirit bound to Van Helsing), is conceptually similar to the pets from the Torchlight series. She can attack enemies on her own, carry excess loot, and when you’re overburdened with too much booty or short on healing supplies, you can send her back to town to sell off junk and pick up potions. She also has an experience bar of her own. While you can buff Katarina out to be a fighter almost on par with Van Helsing, you can also unlock several passive abilities of hers that buff Van Helsing. This is an interesting mechanic because if she temporarily falls in battle or if you send her off to the market, Van Helsing can become quite vulnerable without her benignant added effects. Lady Katarina can also be set to pick up all loot you pre-specify, leaving you with more time on your hands to kill baddies, and less time to sift through loot that you may deem below your stature. 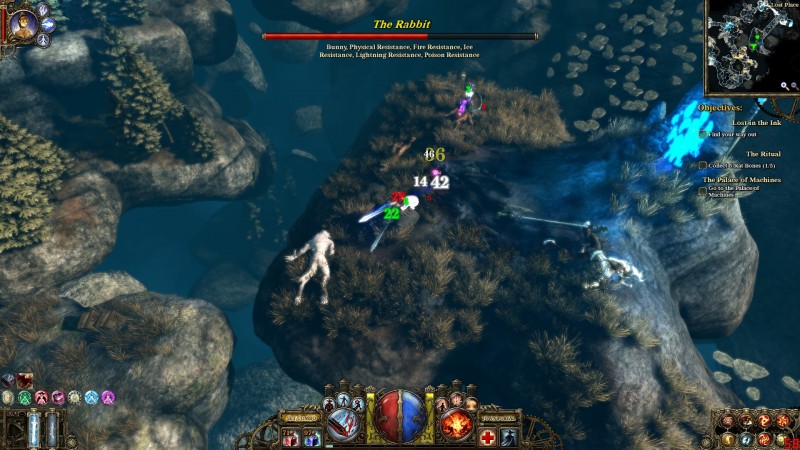 Graphically, we found Van Helsing to be pretty impressive. While it may not sport the most cutting-edge graphics, the environments and monster models were exceptional throughout, adhering to the dark 1890s Eastern European motif that has been almost completely absent from recent gaming. The maps and environmental models are a definite high point for Van Helsing. They’re huge and beautifully detailed, ranging from forests, to sewers, to rooftops, to ethereal floating islands. The fine touches put into the water, grass, and special magical objects are downright impressive. There are plenty of advanced PC graphical options to tinker with if Van Helsing gives your older PC some trouble.

The voice acting, on the other hand is atrocious. Katarina and Van Helsing deliver their lines fine, but everyone else could have been recast and it would have been a service to the player. But perhaps it is also due to the lackluster writing which ranges from average to poor. Again, the complete absence of vampire enemies from a Van Helsing game seems more and more absurd as time goes on. The final boss encounter delivers a few lines that will make you chuckle, but the fight lasts so long and you hear him say the same lines over and over again, it becomes more annoying than clever.

But Action RPG fans normally don’t play primarily for the story. It’s the action and the loot that we seek. The action is aplenty. The loot variety… not so much. There is a very limited visual assortment in item drops. Most of the armor looks the same, but the variation in stats is where you’ll find performance differences from one piece of equipment to the next. There are about five to ten different hat and cape models. By the end, even though it would ruin the gun and sword wielding image they were going for with Van Helsing, we were desperately wishing for some spears, halberds, morning stars, shotguns, crossbows, or any other number of pre-assault rifle-era weaponry.

You can play Van Helsing cooperatively, which is standard fare for the genre. At the time of launch, there is some connection issues, but the developer has reached out to us to let us know they are frantically working together with Steam to correct the issue.

Action RPG fans will find a lot to love here if they aren’t expecting a flawless delivery. The music is great. The action is fast-paced and hectic. The monster variety is perfect (save for the absence of vampires). And you can’t complain about a 16 hour campaign from a $15 game. Truth be told, we had a great time playing through Van Helsing and do recommend it to fans of the genre. But the problems it has keep us from from giving it our full endorsement. If you can see past the small weapon selection, terrible acting, and you can wait for the launch day connection issues to be resolved, Van Helsing is a game for you.