Some games you complete in an afternoon and you feel cheated and used. Other games seem wonderful at first, but after six hours, you notice more and more chinks in the armor and you realize, “maybe this isn’t as great as I initially thought.”

Then along comes a game like Company of Heroes 2, where the development team takes the time to get as much right as possible: graphics, sound, gameplay, level design, single player, multiplayer, coop. Nothing feels heedlessly tacked on. Nothing feels rushed. Simply put, Company of Heroes 2 is the real time military strategy game that PC gamers have been craving for a long time. It is superb.

But before we get too effusive, let’s take a look at the highs, lows, and everything else between from Relic’s latest explosionfest. 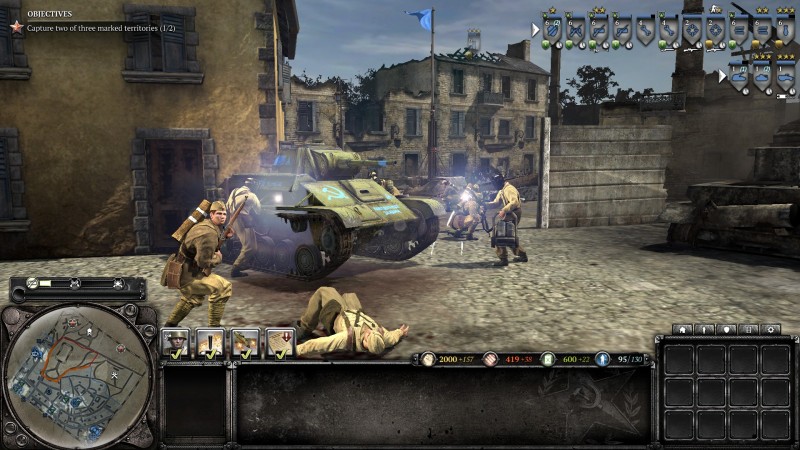 Company of Heroes 2 boldly goes back to the war we’ve all played dozens of times before, but this time highlights the lesser glorified conflict of the Eastern Front. Yes, there are some games that touch on the Eastern front like the Men of War series and Red Orchestra 2, but for the most part, that vein is still untapped.

Relic took a huge gamble going back to World War 2. There is a comfortable simplicity to the war that pays off in their favor, big time. Tanks, light armored vehicles, riflemen, machine gunners, snipers, and engineers all act in accordance to their decades old archetypes and naturally fulfill the rock, paper, scissors, lizard, Spock pecking order that almost all RTS games use.

The single player campaign begins in Stalingrad in September 1942. Russian forces are being beaten back by the German blitzkrieg, and for the first few missions, you’re on the run, outgunned, and outnumbered while you learn the basics of the game.

Eventually the tide (and the weather) turns, and the single player campaign switches from taking a beating, to delivering a beating, and the gradual payback feels great. You tinker with base building and the extended functions of the game, all the while competing against the clock, resources, and of course, the Germans. 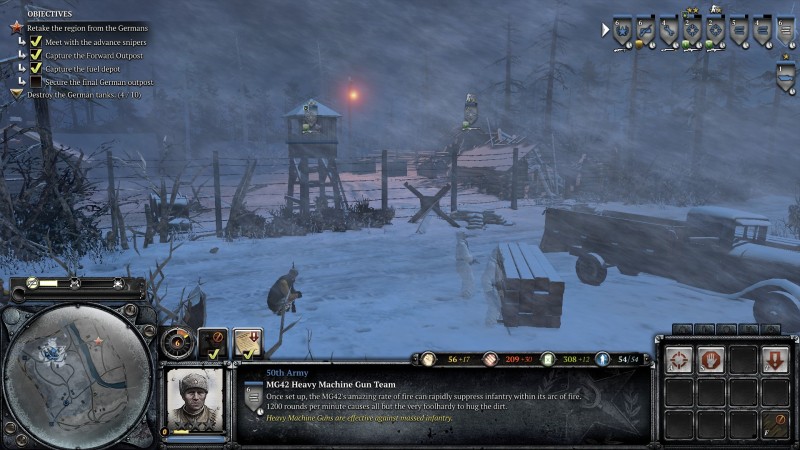 In each mission, you’re given a limited amount of supplies and ordnance, though the body count (not the population cap), is nearly limitless. By capturing supply points, you can refill your ammunition surplus or fuel supply, the game’s two resource-based currencies used for building tanks, mechanized units, calling in airstrikes, and purchasing weapon upgrades. Leader points, the currency used to recruit new troops, are slowly doled out automatically over time or are awarded for your actions in battle.

For those unfamiliar with the original Company of Heroes, combat is heavily cover and flank-based. Foot soldiers perform better when concealed behind cover. And all enemies are weaker when attacked from the sides or rear. Soldiers can occupy buildings, giving a great advantage over infantry on the streets, however, they become incredibly vulnerable against tanks and explosive attacks that can demolish the entire building.

Infantry can pick up advanced weapons from fallen foes, and promotions are given to units after gaining enough experience, typically from kills.

For single player-centric gamers, you’ll be happy to know that Company of Heroes 2 will clock you in between 15 – 25 hours depending on your skill and your play style.

If you typically only play multiplayer games, CoH2 won’t leave you disappointed. Company of Heroes 2 features an intense multiplayer experience which includes the Victory Point mode similar to the first game involving capturing and holding strategic points against enemies as well as the traditional annihilation mode. There are several varying sized maps to choose from, each with a winter and summer mode. And yes, the weather matters. The environment always plays a key factor within Company of Heroes. In the cold winter wind, your infantry will freeze to death if they don’t find cover or an open fire.

With each round, players gain experience points, which unlocks new commander cards, vehicle skins, as well as bulletin boosts, enhancing the different units of both Germans and Soviets. Multiplayer also allows players to test their skills against similarly ranked players through the game’s automatch ability. Additionally, players can opt to do some good old comp stomping to practice strategies either alone or with friends.

A multiplayer extension, which we’re particularly excited about is the new Theater of War mode, which lets gamers play coop mission challenges, solo challenges, and AI battles, separate from the main campaign of the game. Unlike many RTS games where there is a clear formula between solo campaign and multiplayer, the Theater of War mode adds a fusion of the good qualities of both modes to provide a unique experience that continues to make Company of Heroes 2 fresh and different from traditional RTS titles.

Visually, Company of Heroes 2 is impressive for a strategy title, but doesn’t feel like a machine hog like the original did. This version is much more optimized. We were able to crank everything up all the way (except for AA) and we were running smoothly throughout the entire experience. We only ran into one glitch causing us to reload an autosave, and we only crashed the game once due to excessive alt-tabbing.

Everything about the sound design begs to be played loudly. The gunfire, the music, the sound of the engines of tanks, all sound authentic, appropriate, and compound on top of one another to create a wonderful auditory experience.

The PC options are standard fare, but lack the ability to keymap, which is sad. We desperately wanted to add map moving to the WASD keys.

What issues Company of Heroes 2 has aren’t enough to ruin the experience, but they are noteworthy if you’re a few seconds away from hitting those purchase buttons.

The voice acting is OK if a bit cliche, and there are plenty of lines that you’ll hear over and over again. By the end of the third mission, we were looking for a way to turn off the warning about Order 227. We get it. We’ll be shot if we retreat. You can globally turn down the voice volume, but then you’ll miss out on some of the great conversations that the soldiers have with one another.

There is no quicksave option! It’s odd to think of an RTS with a quicksave, but as PC gamers, we instinctively smacked that F5 whenever we hit a personal milestone. The autosave function of the game works pretty well, but it can sometimes result in you backtracking about 30 minutes of progress if you make a silly mistake and wipe out your entire army, or a mission specific key unit.