Your votes are in and The Witcher: Enhanced Edition prevailed.

I was thrown into a gritty fantasy world full of monsters, thieves, and racism. While this might sound pretty normal for the genre, the world in The Witcher, or at least what we see of it, is not one I would like to visit. It’s not like Skyrim or Game of Thrones where you think “Man, that would be a cool fantasy world to live in.” After walking around the city streets in The Witcher, you get more of a “Man, it’s dirty, everyone hates me, and I just realized that there is no such thing as plumbing,” type of reaction. 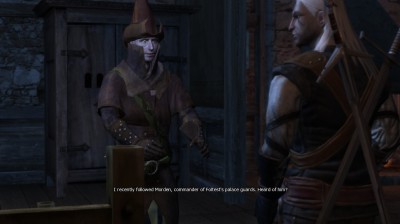 You play as Geralt of Rivia, a human turned monster hunter (or Witcher, hence the title), and you have amnesia after purportedly resurrecting from the dead. You are saved by other monster hunters (or Witchers, hence the title), and taken to their castle which is immediately broken into and ransacked. Geralt takes it upon himself to retrieve stolen mutagens, which are the potions and other alchemical paraphernalia used to create new Witchers from the bandit group called the Salamandra. Little does he know that he is about to get roped into a civil war between humans and non-humans while trying to bring down a crime ring, and the choices he makes decides the fate of the world! Well, maybe not the world, but definitely the people he is immediately involved with.

Let’s focus on Geralt for a second. He is singlehandedly one of the most, and least interesting characters I have come across. Nobody really seems to like him; they just merely tolerate him because he does their dirty work for what I think is not nearly enough money. He doesn’t seem to care about anything in the world, and speaks in a monotone voice devoid of any feeling whatsoever. That gets to be extra funny when the writers decided he would spout witty one-liners at some point during the game. 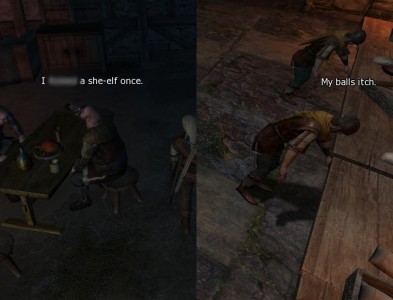 This interests me because even though it seems like he is generally disliked, just about every woman in the game wants a piece of him. The Witcher uses its mature rating to the fullest by giving you a hand drawn image of every woman Geralt sleeps with, usually at least half naked, which made me laugh because it seems like they’re essentially high fantasy versions of the risqué cell phone pictures you don’t want your friends to mistakenly stumble upon while they’re swiping through the pictures of your new puppy. However, the apparent lack of caring on Geralt’s part gave me little motivation to follow up on a lot of the quests I was given.

Speaking of quests, my god there are a lot of quests. They are like the hydra; every time I finish one, two more pop up in its place. There are usually three or four that all relate to the main story, and a metric crap ton of others that make your quest log look like the spam email account you forgot to check last week. For some reason, random bounty quests found on notice boards are always my favorite, and I refused to take them because it would just add another click to my mouse wheel scrolling to find it, not to mention take up a spot in my limited inventory for the actual piece of paper pinned to the notice board.

Just to clarify, I’m not complaining about the inventory system. I actually quite liked the limited inventory because really, how many pieces of jewelry, mugs of beer, and ham sandwiches can you pick off of the bandits you just killed before your pockets are full? 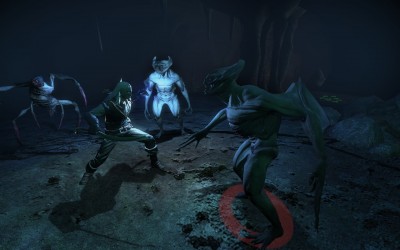 Once you get into killing said bandits the game starts to liven up quite a bit. Combat is mostly controlled by the mouse with timely left clicks for sword combos and right clicks for your Fus-Ro-Dah magic. You have different sword styles to switch between depending on whether you’re dealing with slow enemies, fast enemies, or groups of enemies, and you will have to switch between them fairly often if you want to survive. I just have one question. Why is a silver plated sword ineffective against humans? It can still stab, right?

Another staple to the combat is alchemy, and by alchemy I mean getting drunk on the battlefield. For every good potion you’re going to need plant or monster parts, and a good, strong alcohol to mix it with. With these potions, Geralt gets benefits such as increased health regeneration, improved reflexes, or the ability to see in dark caves. You can probably get by without alchemy on the standard difficulty, but it is super helpful; especially when you’re too impatient to wait for your health to slowly regenerate.

In order to make potions and level up you have to meditate: making a campfire at a predetermined fireplace, or asking one of your friends if you can crash on their couch. You essentially get to “build your own Geralt” in that you have a lot of choices when it comes to how you want to distribute your skill points. You can go straight damage, power up your magic, or deal damage over time effects such as bleeding. The best part is that it makes a significant difference when you battle. You can easily tell how much easier certain enemies are even by just adding what seems like a small skill to your bag-o-tricks. 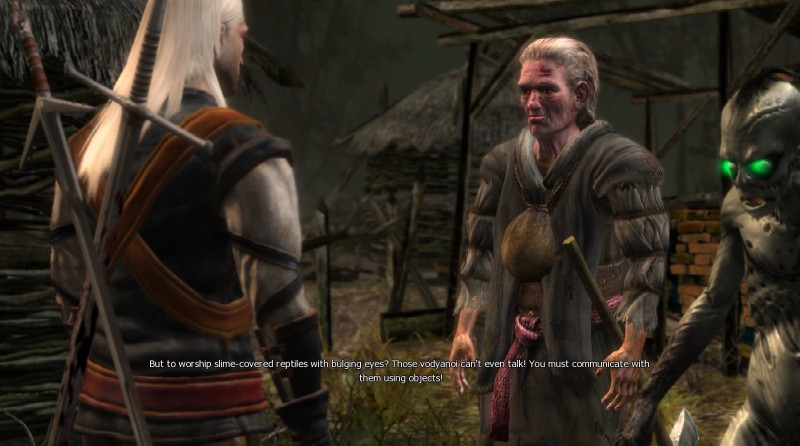 I mentioned that the fantasy world in The Witcher is bleak and gritty, but it does a great job at being just that. Cities and villages feel alive during the day and very desolate at night, and more dangerous areas like the swamps have an actual aura of foreboding rather than just being a section where enemies pop up. My only complaint about the actual world is that there are a liberal amount of recycled character models with palette swaps. Maybe that’s why all the women want Geralt… he’s the only man around that isn’t super old, or morbidly obese wearing bells around their neck.

I know I’m going to get some hate for it, but despite the engaging combat The Witcher didn’t really do much for me. There was too much time between combat sections filled with monotone voices, and I found myself drifting in and out of the longer conversations. While there are multiple paths the story can take depending on your in game choices, I don’t think I’ll be revisiting The Witcher anytime soon. The strange thing, is I’m still very curious about The Witcher 2…

In honor of the newest Humble Bundle, my next backlog will feature one of those games. The choice of which one is up to you.

(Awesomenauts is absent because it is a multiplayer experience, and my backlog is focusing on single player games. It is a great game though. Check out out review to find out why.)

Voting has ended and the winner is Hotline Miami .