Just when I thought I was done with the well endowed shinobi girls, XSEED serves up Senran Kagura Bon Appétit! No, I’m not particularly excited enough to use an exclamation point; it is just part of the title. If you read my review of Senran Kagura Shinovi Versus you know that this series revolves around anime girls fighting each other in skimpy clothing. However, this time around they’re taking a break from all the senseless violence and focusing on cooking! That time I was excited enough to use an exclamation point. 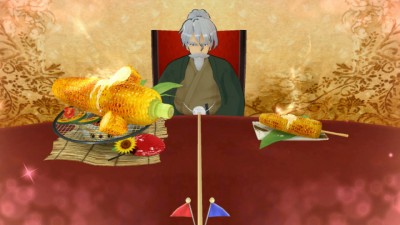 The final judgement is the best part

Bon Appétit is about food, but it’s not like Cooking Mama where you pick a recipe and follow the steps. We’re actually dealing with a simple rhythm game. You face off against other shinobi girls and it mostly boils down to pressing whatever buttons the game tells you to in time with the music. The better your button presses, the better your dish.

For some reason, probably perverted, Master Shinobi Hanzo decides to put together a cooking competition where the winner gets a Secret Ninja Art Scroll that grants the user one wish. The story is a little different depending on what character you pick, but overall it’s a stretch to even call it a story and the game even lets you know it. The only real redeeming quality is Master Hanzo himself. Whenever you do really good on a level a bizarre but fantastic scene plays out where Hanzo praises you while doing some off the wall antics on giant versions of your food. That was easily my favorite part of the game. 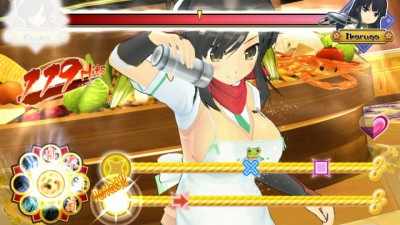 Cooking up a storm

Aside from these scenes, Bon Appétit does not really impress graphically. Sometimes the 3D models look good while other times they look either washed out or hardly shaded at all. This usually happens when the cut-scenes show them close up. Most of the time you’re not even going to know what’s going on during the game because your eyes are going to be glued to the bottom of the screen where your button prompts are. It makes sense for a rhythm game, but it would have been nice to see the rhythm section integrated with what’s going on in the background.

Bon Appétit has three modes. Story, Arcade and Free Play, but they all boil down to the same thing. There are two horizontal tracks at the bottom of the screen that send various buttons across for you to press in time with the music. The better your performance, the better your food is going to be. Each level is split up into three rounds and after each round the loser loses a piece of clothing because that’s the kind of game this is. If you win all three rounds you are treated to your opponent lying on some sort of dessert with only whipped cream and chocolate covering her.

I understand this game is about fan service, so the clothes stripping off and the girls sitting in ice cream bowls didn’t really faze me much. What made me uncomfortable actually happened during the level. While the third round is the only one that matters when it comes to victory, the incentive for doing well in the first two rounds is a heart shape that comes across one of the tracks in the third. When you press a button as the heart goes by you get a close up of your opponent’s chest, butt and the tears in her eyes. I didn’t really feel bad about playing this game until I saw close-ups of the half-naked crying girls. 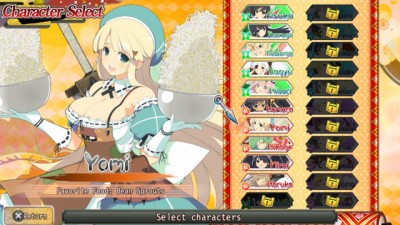 Aside from the excessive fan service there are two issues I have with Bon Appétit. First and foremost, the point of a rhythm game is the music variation. Bon Appétit only offers 10 songs for the entire game. This means after two or three characters’ stories you have heard all of the songs in the game, and none of them merit a repeat performance.

In addition to the lack of music, you only start out with ten characters. The rest of the character slots are there with padlock symbols over them, but the only way to unlock them along with more music is through DLC. That’s understandable for a $15 game, but with the DLC you end up paying that again for 10 more characters and 12 more songs. $30 for 22 songs seems like a bit much.

Unfortunately the ending animations featuring Master Hanzo aren’t nearly enough to save Bon Appétit. While the gameplay itself isn’t bad, it has been done multiple times before with better mechanics and more recognizable music. The fan service and gratuitous underwear shots are not surprising, but it gets pretty creepy when the girls start crying. The main deal breaker is the lack of content because nobody wants to pay $15 for a game to be told they have to pay another $15 to unlock the rest of it.