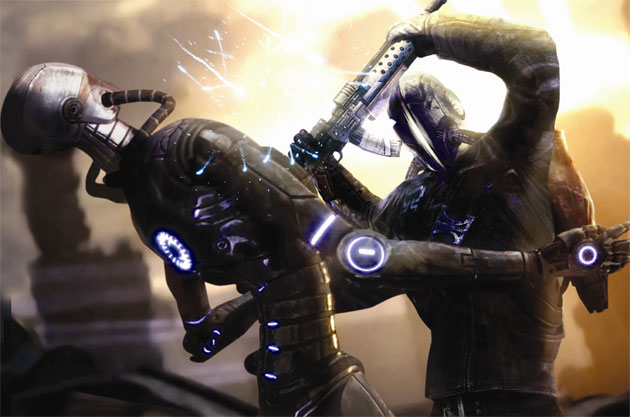 Many times I have high hopes for a game only to have them dashed upon release.  Such was the case with Capcom’s Dark Void, developed by Airtight Games, the studio behind 2004’s Xbox exclusive Crimson Skies.  As I unwrapped my copy I was looking forward to being swept away by a wave of innovation and fun, but 6 hours in, I was bored.

The year is 1938 and you play Will Grey, the ruggedly handsome protagonist channeling Nathan Drake.  In fact, the entire first six chapters have you stranded on an uncharted island in the Bermuda Triangle with your ex-girlfriend  as you navigate ancient ruins.

This is when the first signs of mediocrity being to shine through as the dialogue is forced.  Characters drop in and out of the story with little or no introduction and whenever a substantial discussion seems to be just around the corner, the cutscene prematurely ends as if the writers were afraid of character and plot development.  It’s also incredibly boring when all of these 1938 characters accept alien technology without batting an eyelash.  As one plays, one begins to feel like parts of the story are missing. 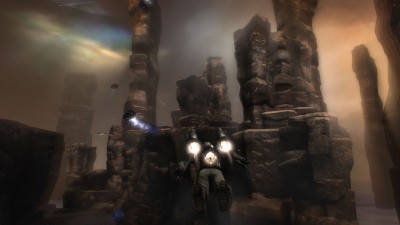 Your jetpack is your best friend, but sometimes you have to coax it into doing what you want.

Essentially, everyone who has ever disappeared, like Amelia Earhart, did so when he or she entered an alternate reality known as ‘the Void.’  The Void, populated by the ‘Survivors’ and famous personages like Nikola Tesla and the aforementioned aviator, is under the control of a race of aliens known as ‘The Watchers.’  It’s up to you to prevent them from crossing over into the real world but the game never injects any sense of urgency.  Rather than leading the resistance, you feel like you’re along for the ride and most will quickly become bored.

This lack of motivation is compounded by repetitive and generic gameplay both on the ground and in the air.  While it is nice to be able to fly around at any time or use your jetpack to flank your enemies, encounters are artificially lengthened by multiple waves of identical foes and the same escort and protection missions over and over again.  Things pick up once you take to the skies in the aerial dogfights, but that’s only because it’s refreshing to be free from the constraints of ground combat.

A third facet of gameplay is the much hyped ‘vertical combat,’ which is one of the high points of the game.  When traversing vertical environments like cliffs, the camera shifts as you move up or down from platform to platform, ducking behind cover and taking out enemies.  It can be disorienting at first, but you soon get used to it and you’ll begin to wish that there was more of it. 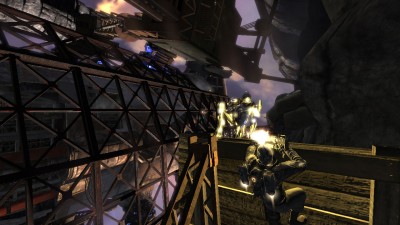 Vertical combat is refreshing and original, but it's not enough to save an otherwise bland title

But even the relatively fun sections are plagued by poor design mostly due to your weapons and how pitifully weak and ineffective they are.  Enemies can take dozens of shots to the head from a futuristic plasma rifle and all weapons except the shotgun feel like cheap toys.  However, you’ll soon discover that almost every enemy can be downed with a single melee attack and once you do, segments that were intended to be frantic gunfights will end quickly as you procedurally punch every enemy to death.  It removes practically all strategic elements from the game.

I also encountered some performance issues that ran the gamut from framerate problems and parts where the sound effects stopped working to one section where the game turned completely greyscale and stayed that way until I next took flight.

The game is of modest length but few will have the patience to finish it because it’s so boring.  If you’re a huge fan of the Ace Combat series or really liked Crimson Skies, you might want to rent this solely on the merit of the dogfights, but otherwise, steer clear.  It’s a poorly written generic action title, and considering its release is bookended by better games like Bayonetta and February’s offerings, there’s no reason to pay full retail.  It has its moments of originality and fun, but they’re few and far between.