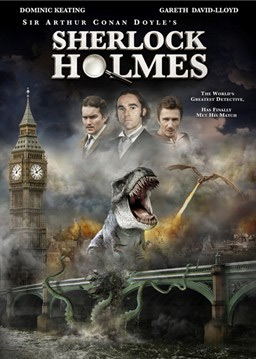 No. I’m not fucking with you. Sherlock Homes’ brother is half-robot. Right now I want to get through my introduction paragraphs before I talk about the robots. We’ll get to them soon enough though.

It was produced by David Michael Latt, David Rimawi and Paul Bales of The Asylum. Together, the trio have a B and C-movie movie resume about a mile long. Most people might be aware of The Asylum’s work from what is aired on the Syfy Channel (I hate that it’s no longer called Sci-Fi) like Mega Shark vs. Giant Octopus and Mega Piranha or even from my previous mockbuster review of Paranormal Entity.

Mockbusters certainly aren’t new to the film industry. In fact, some of our favorite films have had mockbuster leeches attached to their hulls. Star Wars had Starcrash. Charlie’s Angels had Angels Brigade. But with the advent of 3-D computer technology and the fact literally anyone with software know-how can edit film, it seems that mockbusters are getting… ballsier.

I thought long and hard about this film. And over the course of my weekend, I’ve told the story of Sherlock Holmes to anyone who would listen. Some thought I was misinformed about the Robert Downey Jr. movie. Some thought it was the dumbest shit they’ve ever heard. Others thought it was outright hilarious. However, everyone I spoke to about this movie asked me the same question. “Why was this movie made?”

Anyway, back to the story.

Sherlock Holmes starts off like any other self respecting movie with an attack on a ship at sea by a giant sea monster. 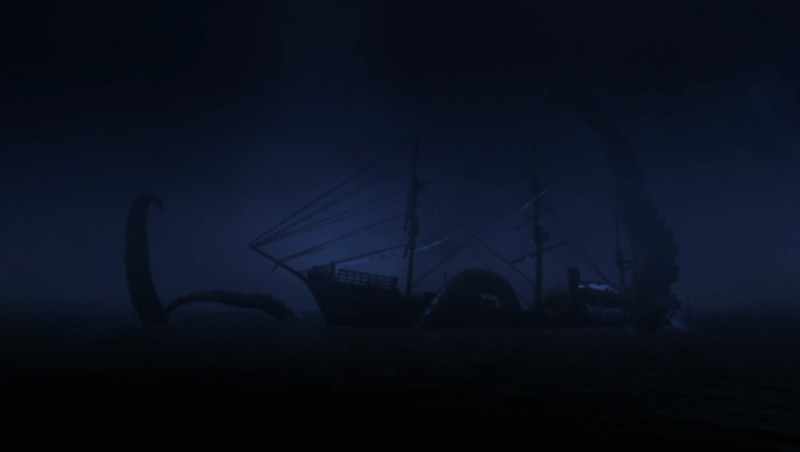 Any movie worth its weight in DVDs starts with one of these.

Since it’s set in the 1800’s and the Scooby Gang are still just an opium-induced twinkle in their grandparents’ eyes, Sherlock Holmes and Dr. Watson are called onto the case to solve the mystery! But with all the clues at the bottom of the ocean and the only witness in an insane asylum, it’s difficult to tell if there is a mystery afoot or not. But Sherlock Holmes, being the expert investigator he is, takes the word of  the babbling former midshipman. From the asylum, Watson and Holmes head back to London only to discover the poor districts are being prowled by a dinosaur with a lion’s roar. 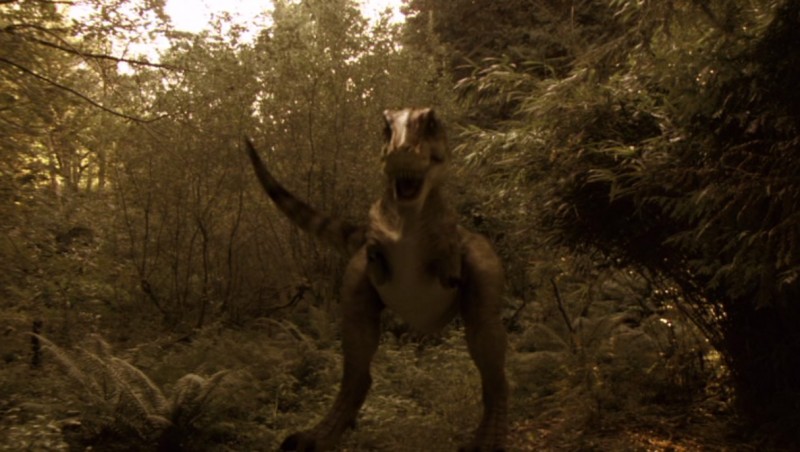 I couldn't make this shit up if I tried.

Thanks to several boring scenes of dialog and a few poorly rendered dinosaur encounters, Holmes deduces that the dinosaur and the sea monster were probably created in the spooky castle in the woods that he used to play in as a child. When Holmes and Watson break into the castle, they discover it is not the abandoned wreck that Holmes remembers it to be. It is now inhabited by Sherlock’s brother, Rainer Thorpe, who after receiving a bullet wound to the spine, recreated himself using 19th century science and is now half-robot. Also, he built the sea monster and the dinosaur and a robot wife for himself using the same technology. Oh, and Rainer reveals to the audience that “Sherlock” isn’t actually Holmes’ real name. It’s “Robert.” Woops! Spoiler alert! I meant to write that at the beginning of the paragraph. 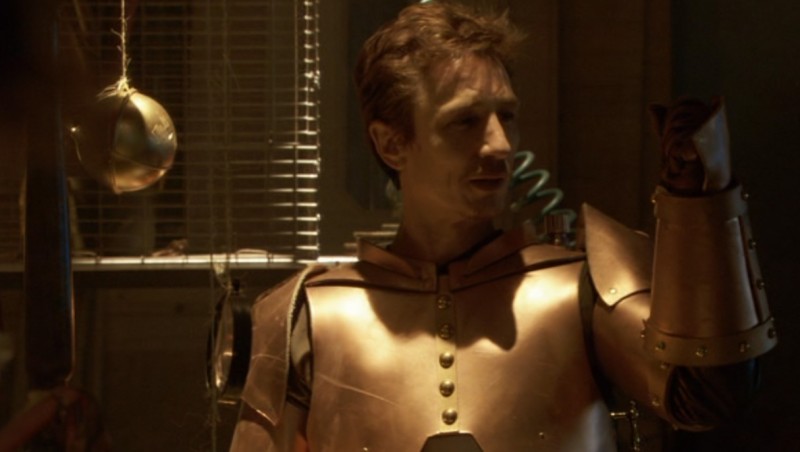 Fans of Sherlock Holmes stories have all pissed themselves by this point in the movie.

So let’s recap real quick. So far we have a dinosaur, a sea monster, and a half-man, half-steam punk robot and his robotic wife. “What’s next?” you’re probably asking yourself. What else could be left? 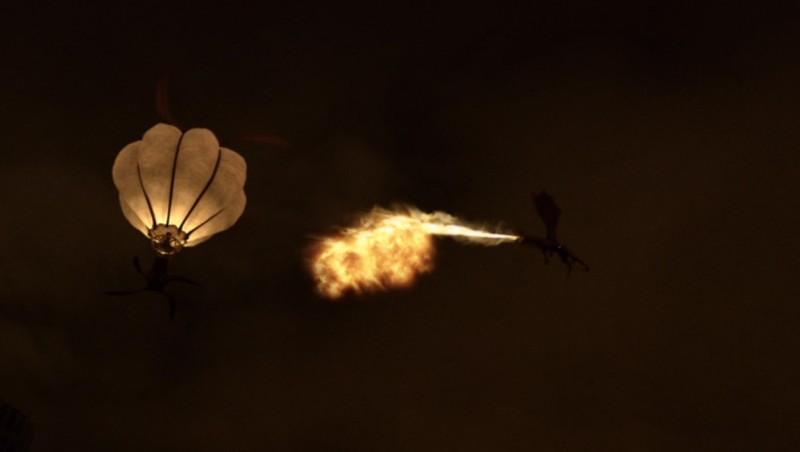 Admit it. Even with the ridiculous pictures on the box art, you never saw this coming. Hot air balloon vs. dragon fight. Epic... something.

Boom. Dragon vs. hot air balloon. That’s right. Shortly after Holmes’ brother bests the dynamic duo in a physical altercation, he sends his fully robotic wife on a suicide bomb mission to kill the queen while he terrorizes the London skies in his steam-powered dragon. Defying death and breaking free from their restraints, Holmes and Watson are off in tepid pursuit; Watson on foot to gun down the bomb-toting love-bot while Holmes takes to the skies in his hot air balloon equipped with machine guns. If you saw this one coming, I applaud you.

After the 20-minute “action” sequence, Holmes and Watson succeed and London is safe… FOR NOW. 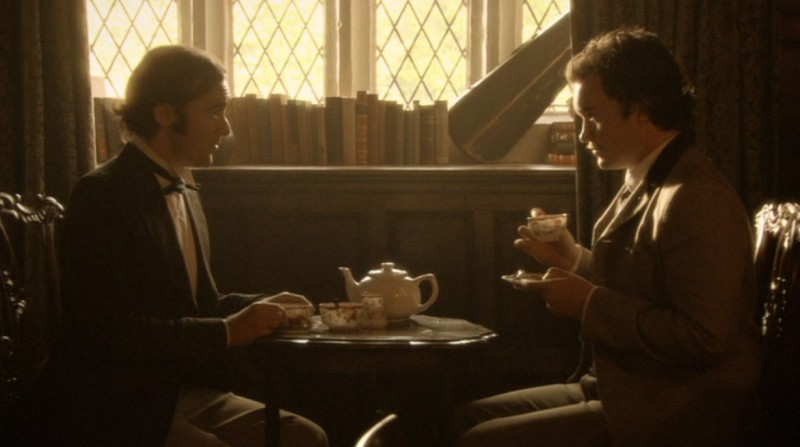 So Sherlock, I mean... Robert... we just killed your robo-brother and his bang bot wife while saving London from a simultaneous bomb-plot / dragon terrorist scare. Spot of tea?

The cinematography in Sherlock Holmes is very reminiscent of BBC science fiction shows like Torchwood, Dr. Who and Jekyll. While even those shows can be cheesy from time to time, Sherlock Holmes takes that cheese factor to a new heights but while still retaining the typically long British dialogue scenes. If that’s what The Asylum was going for, they nailed it.

The acting by almost all the main characters is passable considering the absolutely absurd roles the actors have been asked /chose to play. I use the word “almost” because the character of Sherlock Holmes is one of the most unappealing actors with one of the most annoying voices in history. Robert Downey Jr. physically is a far cry from the classic character who is supposed to be Ichabod Crane-ish in appearance (tall, dark hair, lanky with a crooked nose). But I don’t recall Sherlock Holmes ever being described as a “wuss.” The Asylum’s Sherlock is short, has a high pitched voice, and he looks like he’s about to cry at any given moment. When he’s “on the hunt” or when he’s right about a clue, you don’t feel victorious for the main character. You think to yourself “why would the cops call this jerk off know-it-all in the first place?” Granted, this is the first movie (that I could find) that starred Ben Snyder. The world should let out a sigh of relief if this is his last.

Watson is fine. The half-robot supervillain brother and his robo-lovah are fine. The toothless prostitutes and the old-timey British re-enactors are fine. It’s Holmes that you wish was eaten by the dinosaur. 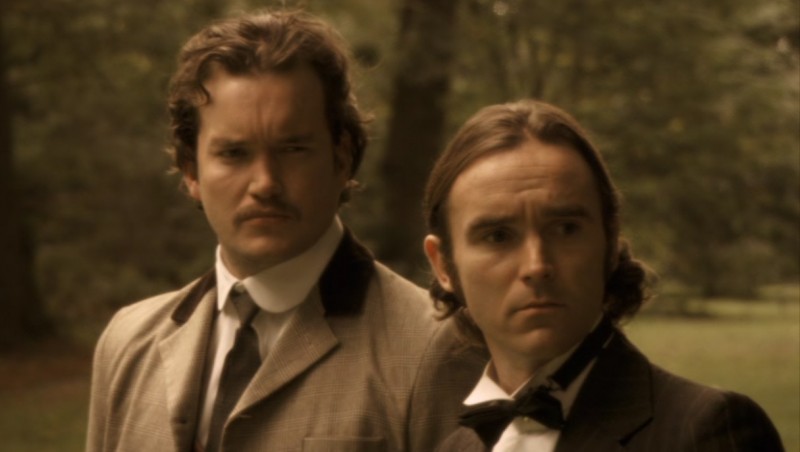 Ben Snyder (right) as Sherlock Holmes manages to make the classic investigator the most foppishly annoying character in history. His high pitched voice almost seems comical, but of all things in the film, I don't think his voice is meant to be funny. (Sad side note: Torchwood is one of my favorite science fiction television series of all times. It's unfortunate to see Gareth David-Lloyd as Dr. Watson on the left.)

Sherlock Holmes is bad. It’s bad bad. Sure it has robots, dinosaurs, a robot wife, a sea monster, elderly hookers and some gunplay, but 99.999999999% of the average American viewing households won’t enjoy this film. That includes the hardcore science fiction geeks. However, I can recommend this movie for anyone who loves watching bad movies while drunk (or otherwise) with friends to laugh at and turn into a live version of Mystery Science Theater 3000. And I think the Asylum is self-aware of that.

So that leaves me with just one question for you, dear reader. If you had the ability to make a robot wife for yourself, would you make her look like this? 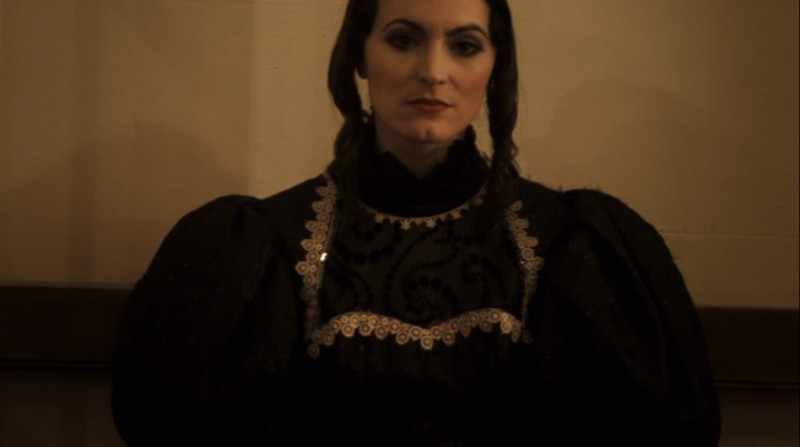