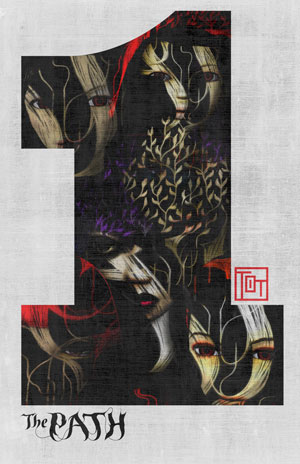 Congratulations are in order to two of our favorite Elder-Geeks, Michaël and Auriea of Tale of Tales as they celebrate one year of success with The Path. Further congratulations are in order as they celebrate 11 years of collaboration! We hope to see many more years of great gaming and gaming art from this talented duo as they continually push the medium where it doesn’t want to willingly go.

To commemorate the successful year of The Path, Tale of Tales released this statement:

One year ago, on the eve of the Game Developers Conference, The Path was launched from a bed in a room in a hotel in San Francisco. The same hotel where designers Auriea Harvey and Michael Samyn first met, exactly 10 years before. Since then, The Path has gone on to become one of the most divisive titles in the history of independent games. Lauded as a milestone in the artistic development of the medium by some and trashed as an insult to the very nature of games by others, The Path left no-one untouched. Today, Tale of Tales celebrates its anniversary with discounts on all their products and a special limited USB edition of The Path.

Over the course of the week, an elaborate postmortem will be released, behind-the-scenes images will be revealed, and several announcements are expected about translations of the Path and the highly anticipated soundtrack album by Jarboe and Kris Force. For the occasion, Tale of Tales multiplayer screensaver The Endless Forest will be cast in mist. Keep an eye on the Tale of Tales blog for news.

“It will be a festive week!” exclaimed Tale of Tales owners Auriea Harvey and Michael Samyn. “The Path was our biggest production ever. It took 3 years to make it, and lots of blood, sweat and tears. And money. All of this will be revealed in the postmortem. This is a double anniversary for us, since we launched The Path on the 10th anniversary of our collaboration. We’ve been working together for 11 years now, but it feels like we’ve only just started.”

The games can be purchased and downloaded here:
http://Tale-of-Tales.com/

The Path is inspired by the fairy tale of Little Red Ridinghood. Six sisters are instructed, one by one, to visit their grandmother who lives at the end of a long path that runs straight through the forest. The forest looms dark and foreboding. But the girls are strangely attracted to it as well. Before long they disobey their mother and set out to explore the misty woods. A journey that ends abruptly when each girl meets her wolf…

The Path is a psychological thriller about growing and growing up, about unfulfilled desire, about control and the lack thereof, about the relativity of freedom, and about eternal innocence. An explicit story is not told in The Path. Instead the scene is set for the player to explore and interpret as they play. In the end, The Path is about you, and about those things you’d prefer to keep hidden from yourself. This can be profoundly meaningful for some, and deeply disturbing for others.