An unidentified source has provided Kotaku.com with placeholder art for Ubisoft’s upcoming sequel to 2009’s Assassin’s Creed II, which apparently is called Assassin’s Creed Brotherhood. Shortly after Kotaku published the image, Ubisoft confirmed that this was indeed the name of the upcoming game. While the game is set to be the third major release in the series, the game builds on the story of the second installment in the series. This is most likely the reason the game itself is not designated as “Assassin’s Creed III”.

The image can be found after the jump and features Ezio, the protagonist of Assassin’s Creed II, along with several unfamiliar characters, though two characters appears somewhat similar to “La Volpe” and Rosa from the previous installment. Little information is currently available concerning the game, but Ubisoft had previously announced that the upcoming Assassin’s Creed game would continue the storyline begun in Assassin’s Creed II and that the game will include online multiplayer.

The text found on the back of the leaked image states the following:

BE A LEGEND – Live and breathe as Ezio, now a legendary master assassin, in his struggle against the Templar Order. Lead your own Brotherhood of Assassins and strike at the heart of the enemy: Rome.

And for the first time, take part in an innovative multiplayer layer, allowing you to embody an assassin of your choosing and define their killing style.

The image further reveals that Gamestop will make a pre-order bonus available in the form of an exclusive multiplayer character. Assassin’s Creed Brotherhood will be made available in Fall 2010 for PC, Playstation 3 and Xbox 360. 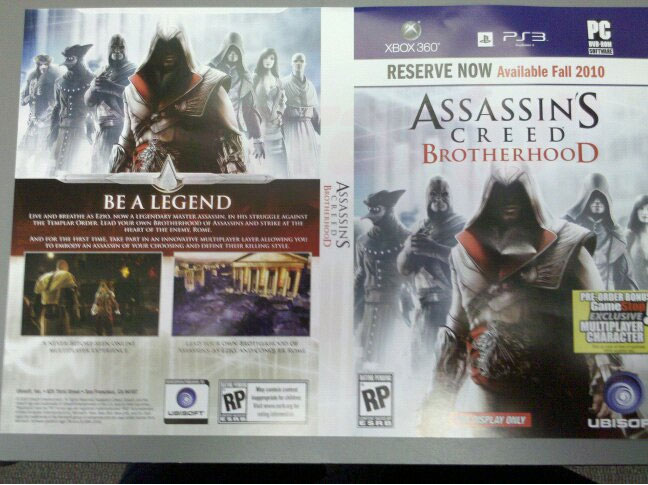