Bethesda Softworks has announced that a collector’s edition will be released for Fallout: New Vegas when the game goes on sale later this year. The Collector’s Edition is currently available for pre-order at participating retailers throughout North America, but it is currently unclear when the Collector’s Edition will also be available for pre-order in other territories.

Besides the regular game and a making-of DVD, the Collector’s Edition will contain a hard-cover graphic novel known as “All Roads” which tells the story of several characters found in the game as well as some events taking place before the actual game. This graphic novel is written Chris Avellone, who is the Creative Director of Fallout: New Vegas, and was made in cooperation with Dark Horse Comics. Furthermore, a set “Lucky 7” poker chips will be contained within the Collector’s Edition, with each of these seven chips representing a chip from the seven major casinos found within Las Vegas. A separate poker chip, a recreation of the “Lucky 38 Platinum Chip” which is found within the game itself, will complement this set. Finally, the Collectors Edition will contain a deck of customized playing cards, with each card depicting a character or a faction from the game.

A final release date has not yet been announced for the game, which is currently in development at Obsidian Entertainment, but it is expected this Fall for PC, Playstation 3 and Xbox 360. A picture of the Collector’s Edition can be found after the jump. 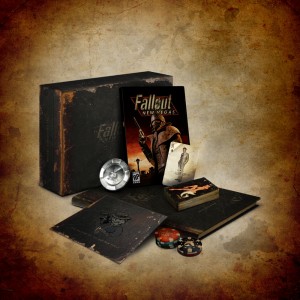