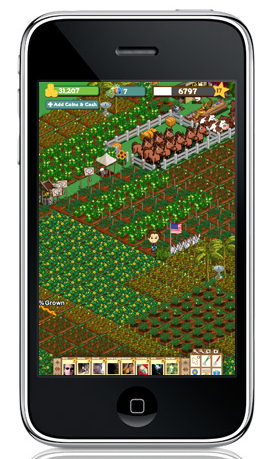 The iPhone’s has kept a vice-like grip on the portable technology market since its release in 2007, and that success has been wooing some of the best developers in the games industry to make new or port over some of the best IPs to the hardware. The trend continues with both Facebook’s Farmville and Activision’s Guitar Hero scheduled for release on the platform. Mark Pincus recently revealed the impending release of the 70 million player strong social game on the iPhone, stating that “With FarmVille on the iPhone, you can farm anytime, anywhere.”

The iPhone version of the popular Guitar Hero music-rhythm franchise is being developed by franchise veterans at Vicarious Visions, and built with Apple’s hardware in mind, featuring avatar customization, built-in Facebook integration, and online leaderboards. The title will cost $3 on the App Store, and come packaged with six tracks, with more planned for release in track packs. No cost estimates for the songpacks have been announced.

“With Guitar Hero for the iPhone and iPod Touch, we are once again leveraging our leadership position in the music/rhythm videogame space to deliver an all-new Guitar Hero experience that millions of people around the world can enjoy anytime, anywhere,” said Guitar Hero COO David Haddad. “From our headliner set list in the base app and forthcoming song packs to the innovative new social integration and guitar shredding gameplay mechanics, Guitar Hero will let players experience and interact with music in all-new ways.”