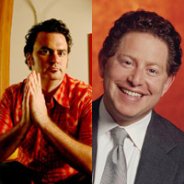 Once upon a time, not so long ago, cult favorite developer Tim Schafer had some key words for Activision CEO Bobby Kotick, chief among them being “prick.” Schafer has since elaborated on his thoughts of the man, but Kotick himself has finally weighed in on the initial tension. Speaking to Edge (via CVG), the same magazine in which he began another verbal battle (this time with rival publisher EA), Kotick voiced his opinions on Schafer the man, and Schafer the developer.

“Tim Schafer. The guy comes out and says I’m a prick. I’ve never met him in my life – I’ve never had anything to do with him. I’ve never had any involvement in the Vivendi project that they were doing, Brutal Legend, other than I was in one meeting where the guys looked at it and said, ‘He’s late, he’s missed every milestone, he’s overspent the budget and it doesn’t seem like a good game. We’re going to cancel it.” Kotick said, “And do you know what? That seemed like a sensible thing to do. And it turns out, he was late, he missed every milestone, the game was not a particularly good game…”

Tim Schafer has since returned to the press statement scene since the comments were released. Speaking to Eurogamer, the Double Fine founder is quoted as retorting, “It’s sad is that instead of just insulting me personally, he goes after the product of my hard-working team – a group of people he almost put out of work a while back. But what’s even sadder is that it took him two months to think of a comeback.”

One thought on “Kotick Responds to Schafer Comments, Schafer Reacts”