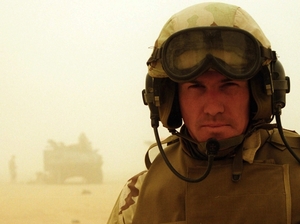 In a much more intimate response than many received in this controversy over EA and Danger Close’s Medal of Honor, former United States Marine Benjamin Busch compares current gaming to the imaginary games of generations past. Deployed as an infantry officer for two combat tours in Iraq, Busch sees the game as making the current conflicts in the middle east into passive, removed experiences, dubbing them “participatory cinema,” among other things. He outlined his thoughts in an essay to NPR.org, excerpts of which follow after the jump.

“My grandfather fought the Nazis and was wounded. For years afterward, my father recreated that war in games in his Brooklyn neighborhood, where some of the children playing had lost their fathers overseas. War games always require two sides, and someone in Brooklyn always had to play the Germans,” said Busch. “We know children are immersed in digital interactivity now, and the soldier of today has grown up on video games. It is becoming a new literacy of sorts. Playing and risking your life are different things.”

“I honestly don’t like that Medal of Honor depicts the war in Afghanistan right now, because — even as fiction — it equates the war with the leisure of games. Changing the name of the enemy doesn’t change who it is,” Busch continues. “But what nation or military has the right to govern fiction? Banning the representation of an enemy is imposing nationalism on entertainment. The game cannot train its players to be actual skilled special operations soldiers, nor is it likely to lure anyone into Islamic fundamentalism. It can grant neither heroism nor martyrdom. What it does do is make modern war into participatory cinema.”

“The games of my youth seem more innocent than the fully articulated violence delivered for the modern day boy, but so did the films, news and books. There is a truth common to all, and that is that playing war in any medium is not combat, and for a gamer, it’s not even political. It’s just sedentary adventurism in need of a subject,” he finished.