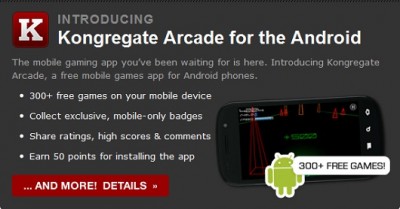 You may recall the couple-hour tenure that Kongregate enjoyed with the original build of their Arcade application, before Google pulled it off the Android Marketplace. The reason behind the removal was that no one application was allowed to function as its own supplemental marketplace, which Kongregate violated by allowing users to download and play over 300 unique flash games. Kongregate has since fixed the issue by making the games run on a browser cache, rather than being downloaded to the device, and has now been restored to the Android Marketplace.