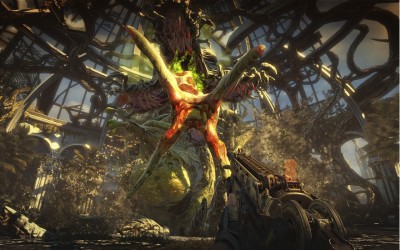 Bulletstorm, the brand new arcade-aesthetic shooter from developers Epic Games and People Can Fly, was only released yesterday, but that isn’t stopping them from announcing their first DLC pack. “Gun Sonata” is set to debut sometime this Spring on all three game versions.

The downloadable content will add in three new maps for for Bulletstorm‘s “Anarchy” multiplayer mode, in additiion to another two maps for the “Echo” single-player score attack mode. The pack will also include two new enhancements to the game’s “Leash” titled the “Flamingo” and the “Pulp”. “Gun Sonata” will cost 800 Microsoft Points ($10).

Too soon to be talking about downloadable content? Are you excited to hear the news? Post your view below!