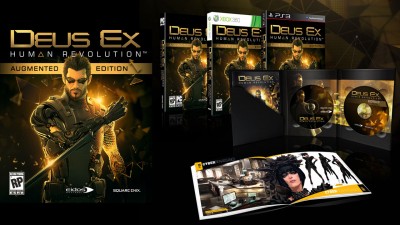 Deus Ex: Human Revolution has been gaining a lot of hype recently from both old fans of the series and newcomers of the title. If you’re one of those interested, then the recently announced “Augmented Edition” may be further incentive to pick it up day one. To see the full list of collector’s edition inclusions, follow the jump.

– A new mission for you to complete.

The Augmented Edition will also contain a 44-minute “making of” DVD , the official soundtrack, a motion comic adapted from the DC series, an E3 trailer, 1 animated storyboard, and a 40-page artbook. The “Augmented Edition” will cost $70, with all versions of Deus Ex: Human Revolution releasing on August 23 in North America, and August 26th in Europe.