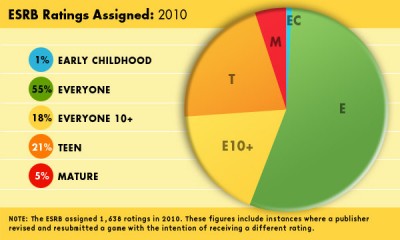 For all of the controversy surrounding them, one would assume that the majority of games released in the United States were for those players 17 years or older. According to the Entertainment Software Rating Board, the exact opposite is true. In its yearly ratings breakdown for the past year, the ESRB charting only around 5% of the 1,638 games (approx. 82) released last year as “M” for Mature.  For contrast, according to BoxOfficeMojo, 31% of 2010’s 531 tracked films (approx. 165) got the comparative rating of R, 39% being completely Unrated.