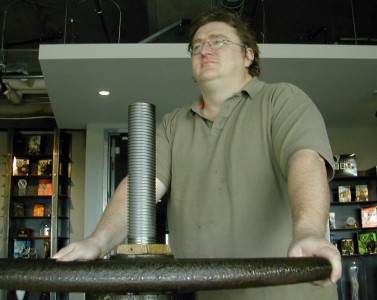 Just when you dared to hope again for Half-Life 2: Episode 3. In an interview with Develop, Valve President Gabe Newell discussed moving beyond episodic content, and more towards “games as a service”. The new aspiration, which the company had already been experimenting with on games like Team Fortress 2, supports game expansions not through individual episodes, but DLC updates and patches.

“We went through the episodes phase, and now we’re going towards shorter and even shorter cycles,” Newell commented. “For me, ‘entertainment as a service’ is a clear distillation of the episodic content model.”

“If you look at Team Fortress 2, that’s what we now think is the best model for what we’ve been doing,” Newell said.  “Our updates and release model on [Team Fortress 2] keeps on getting shorter and shorter…We sort of amortize the risk by working on different frequencies for different projects. Team Fortress 2 is the fastest frequency we work on with comparatively fast updates. Er, Half-Life is apparently the slowest! Although, from the outside world, we have no evidence that Half-Life is working on any frequency at all. Left 4 Dead is starting to approach the Team Fortress 2 cycle.”

Speaking about future Portal 2 support via its in-game store, Newell stated, “We’ll have to see how much our customers want us to push in that direction. In general, our approach is to come into work and ask ‘what can we do for our customers today’? We get a huge amount of value in releasing things. Every decision you see our Team Fortress 2 team make is a direct result of feedback they’re getting from customers.”

“Everything our team does is a result of tests they’ve done on the last two or three releases. Because its information from the last few updates that tells our team what to do next.” Newell concluded, “I think you’ll still see projects from us that are huge in scale, simply because we have the ability to do that.”

Are “games as a service” something you’d like to see more, E-Gs? Or do you feel this is just another reason for another Half-Life delay? Comment below!

3 thoughts on “Valve Moves Away from Episodic Model”