I didn’t think it was possible, but Duke Nukem Forever flew over the heads of the critics this past week. Those expecting Nukem’s much filibustered adventure to leap out of hibernation and compete with the modern Call of Dutys and Grand Theft Autos completely missed the point of our derivative Duke. Forever is just as pale a gameplay imitation of its modern counterparts as his Duke-ness’ 3D fragfest was to id Software’s early work; it’s the humor aesthetics of the character that have always been the calling card of the franchise. Unfortunately for Duke Nukem Forever, that part sucks too. 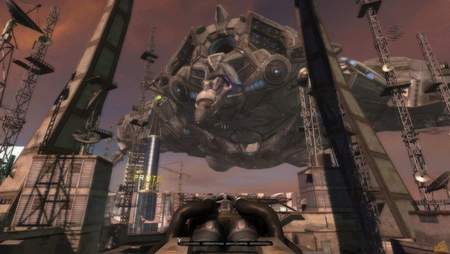 Nothing is broken, gameplay wise, but what hasn’t been outpaced (by games both current and half a decade old) holds little lasting amusement. Duke’s classic weapon arsenal has returned, and those basics will hold some serious nostalgic punch for a couple of hours. Beyond the expected loadout of pistol, shotgun, machinegun, Nukem gets his hands more than a few novelty boomsticks. The freeze and shrink rays are still damn fun to use (until the later becomes too much of a story and gameplay gimmick), but it won’t be too long until the muscle memory of FPSing takes over, leaving just an average gameplay run in its wake. Also, you can only carry two weapons at a time.

Driving sections control decently, but add nothing to the flow of gameplay

What hurts Forever most is, sadly, what most could expect from the industry’s longest development cycle. Too many ideas went into this game without any foresight for cohesion and integration. There are many little nuggets of interactivity open to Duke, but most feel like glorified tech demos that go nowhere. The most one could get out of lifting weights, preening in front of mirrors, drawing on whiteboards, drinking from water fountains, being a voyeur, etc. is a boost to your “Ego” bar, which is a hypocritical recharging health meter for a character who is supposed to have a beef with modern shooters. For a game seemingly trying to do its best to recall the 90s; its default button layout, color palette, linearity and loading screen length is in lock step with every 2-year produced shooter since 2005.

In terms of pacing, Nukem is all over the place. The gamut mainly has you running and gunning in the expected perspective and persona, and there are no real complaints to be had on how Duke and his death-dealers control. On occasion, mostly during boss encounters, Forever will manage a sweet flow of gameplay and one-liners that should hit even the most cobweb infested of nostaglic pleasure centers. But those moments are spliced rarely in between countless, linear corridors. Variety was attempted with a few kart racing segments, environment traversal and idiotic fetch quests, but all feel rushed and cheap in their inclusion (if not their controls). 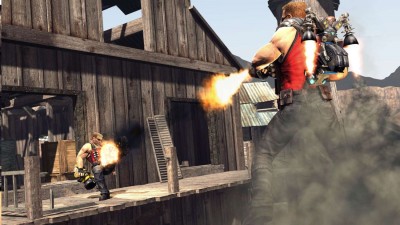 Multiplayer packs a stronger – if still ineffectual – punch. The campaigns run the usual breadth of modes, again failing to go beyond the current gameplay design and style Duke supposedly has it on for. Deathmatch is the most fun, as it’s the part that comes closest to the balls-out anarchy that made 3D an innovator in a new subset of histrionic shooters that would later include Serious Sam, Painkiller, and Postal. The rest on display here is simply bland; something so anachronistic to the personality the player controls it’s comes off as just another design leg dumped out in the attempt to finally finish the game.

But  surely Jon St. John’s return as Nukem redeems this festering ball of mediocrity? Well….yes and no. The humor’s back, and when it works, you’re twelve again in the greatest kind of way. Aliens have returned and once again aspire to kill our women and turn our men into anthropomorphic pigs. That and they drank the last of Duke’s beer. This sends him on a one-note quest for vengeance and adventure. You never lose in this game, you just have “balls of fail”. Duke’s commentary can be blindingly funny, perfect in that shameful “It was the 90s” kind of way that you dreamed it could be. 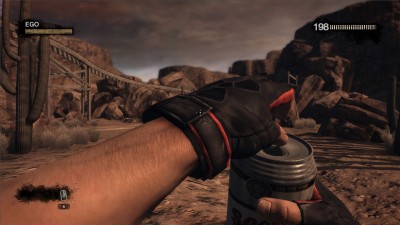 Beer restores Ego, a meter you restore by running away like a frightened child.

Then you get the achievement for turd tossing, and those bare – slapable – human breasts that adorn alien walls. When it misses the mark, as it does often, the story can be either achingly stupid or rapidly approaching offensive. 3D Duke threw money at prostitutes, Forever Duke gives you the option to either shoot women impregnated with alien seed or watch them die and fight the offspring. Then, without missing a beat, it can win a “Name that Internet Meme” contest against the writers of “Family Guy”. Even Eat Lead: the Return of Matt Hazardhad a more consistent humor to it, and that was a parody of Duke’s parodies. Playing the game is a reactionary struggle that we’ve never seen at Elder Geek, and hope to never have to experience again.

What’s good is amazing. What’s bad makes up 95% of the game.

The best thing that can be said about Duke Nukem Forever is that it is done. Now that 3D Realms’ boundless ambitions have been realized in the marketplace – despite the trampled and abused state they were left in – Gearbox can start a proper production cycle on a sequel that won’t be bogged down with the industry’s heaviest albatross. The story may consistently reach the ludicrous idiocy that made Nukem a star, but it’s beset on all sides by a flaccid package that retreads a junior programmer’s understanding of the last five years of first person shooters. One hand in the past, one skid mark in the future, it may have been impossible to make the game worth the wait, but they could have at least made it worth the install time.