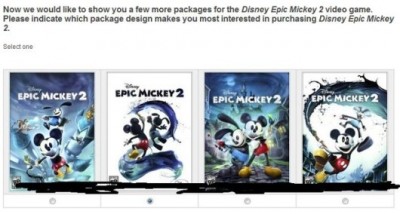 In a fan newsletter, first spotted by fan news-site Stitch Kingdom, a sequel to the Wii’s Epic Mickey is on track for a 2012 release. Last we heard of a possible follow-up to the painting-platformer was in a focus group survey released by Disney last August (thanks Joystiq), where it was strongly hinted that Epic Mickey 2 could come to the Xbox 360 and PS3, and with a new co-operative campaign. Disney has confirmed neither the new features to Mickey nor the game itself.

“Disney Epic Mickey 2 is the latest game in the critically acclaimed Disney Epic Mickey videogame series.” reads an excerpt from the survey, “In this all-new action-platforming game available for Xbox 360, PlayStation 3, and Wii, Mickey embarks on an epic journey and is pulled back into a world filled with Disney’s forgotten characters. Players can choose to play single-player as Mickey or for the first time players can also choose two-player split screen mode. In the two-player mode one person can play as Mickey wielding magic paint and paint thinner to dynamically change the world and the second player can play as Oswald the Lucky Rabbit – Walt Disney’s first cartoon star – with the power to fly like a helicopter and use electricity to fight or friend enemies and solve challenges. Team-up and choose your path to save this forgotten world because the choices you make will alter the story and change the end of the game!”