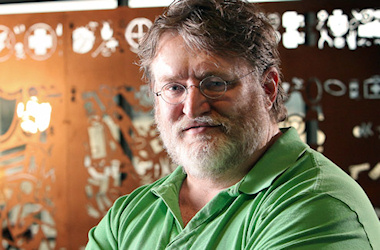 Speaking in a long form interview with the newly launded Penny Arcade Report, Valve head Gabe Newell discussed his idea for the future of the studio; a future that could include wearable computers and hardware manufacturing. Everything is speculation at this point, but Newell emphasized that wherever Valve feels it needs to go to continue innovating, he is ready to lead the charge.

“If we have to sell hardware we will,” Newell described. “We have no reason to believe we’re any good at it; it’s more we think that we need to continue to have innovation, and if the only way to get these kind of projects started is by us going and developing and selling the hardware directly then that’s what we’ll do…It’s definitely not the first thought that crosses our mind; we’d rather hardware people that are good at manufacturing and distributing hardware do that. We think it’s important enough that if that’s what we end up having to do, then that’s what we end up having to do.”

Newell stated that the current format for hardware manufacturing must change in order to survive the latest shifts in industry trends, particularly if console and PC makers want to provide the kind of open-ended platforms Valve believes to be the future. “I would push them very hard to stop thinking of themselves as being a platform for everything that already exists and start betting on the inventiveness and the benefits that you would get by embracing a more open approach to the internet and game delivery and game business models and things like that.”

Would a Valve console be something you’d want to invest in, EGs? What’s your response to Gabe Newell’s goal of more open-ended platforms, and even wearable devices? Comment below!

2 thoughts on “Valve May Go into the Hardware Business”