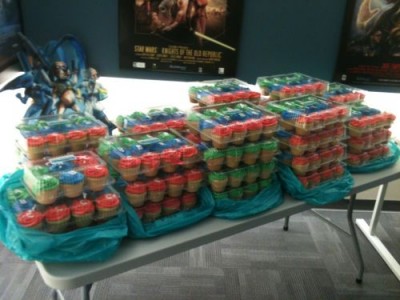 However you find the fan debate on the endings to Bioware’s Mass Effect 3, it’s hard to argue how amusing and overall beneficial its been to sit back and watch all parties involved try to out-charity one another. The latest offensive in the “Retake Mass Effect 3” campaign’s effort to draw attention to their distaste for the final chapter of the space opera saga – which should now be known as the “Cupcake Offensive” in its own Mass Effect codex entry – sent 400 green, blue, and red cupcakes numbered 1-3 to Bioware’s Edmonton offices at a cost of $1,005 (reportedly raised in 1 hour on ChipIn).

Instead of indulging in the baser urges of gluttony that would have certainly plagued any lesser developer, Bioware instead sent the 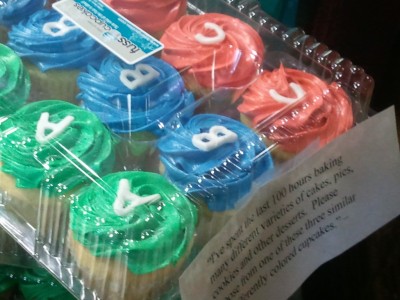 cupcakes to a local children’s shelter. Chris Priestly, Bioware’s Community Manager, explained the action on the company’s forums, “We want you to know; we are indeed listening to all fan response and acknowledge your feedback. We appreciate creative and thoughtful attempts like this one…The gesture certainly gained our attention both with its creativity and deliciousness. However…after a lot of discussion, we decided ultimately the reason that they were sent was not done in the context of celebrating the work or accomplishment of the Mass Effect 3 team. This is a subtle, but important aspect in determining how to pass the feedback to the team.”

The post continued, “BioWare regularly works with many deserving charities,  as such it was decided that rather than passing  out the cupcakes to staff or wasting good food, to donate them on behalf of our fans to a local Edmonton youth shelter. We know that for the kids that have to use this facility, something as simple as a cupcake is a rare treat and would definitely brighten up their day.  Thank you to the fine folks at the local youth shelter for accepting the donation and to the fans who donated the cupcakes…Please keep providing your feedback on Mass Effect 3, we’re still listening.”

This ineffectual Cupcake Offensive is just the latest in a long line of community actions that have, regardless of intent towards creative ownership, spawned significant charitable actions. The “Retake Mass Effect 3” campaign began as a charity drive for Child’s Play, and has since spawned the Full Paragon drive for children’s literacy in addition to now transitively giving impoverished children a delicious if slightly confusing snack. Combined (including the $1,005 worth of cupcakes as an indirect donation) the oft-derided subset of the Mass Effect community have none the less raised a total of $85,715 at time of publishing.