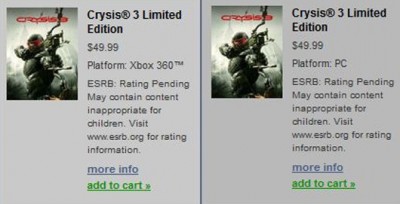 After its existence was mistakenly revealed on their Origin service, Electronic Arts confirmed that a formal reveal of Crysis 3 information can be expected on April 16th. Speaking to Joystiq, EA proclaimed that “The best kept secret in shooters just can’t be contained”. According to Russian gaming website Madfanboy (via CVG), Crysis 3 will be set in a devastated New York City that is “almost a jungle”. A Spring 2013 launch is expected for the game, as is a simultaneous launch across 360, PC, and PS3.